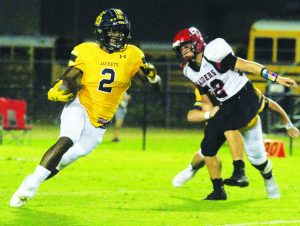 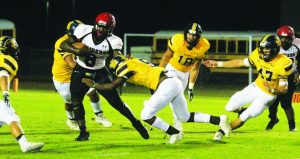 Jeff Davis High upped its record to 5-0 with a 54-7 homecoming victory over Bacon County last Friday night. It was the Region 2-AA opener for both schools.
The Jackets spotted the Raiders to a 7-0 lead but then scored almost at will. Bacon’s final score came in the fourth quarter with the substitutes on the field. The scoring drive marked the only first downs the Raiders made after their opening possession as the Jeff Davis defense continued to shine.
Audiel Placencia opened the game by booting the kickoff into the end zone. Bacon County then marched 80 yards in just six plays to go up 7-0. The drive was helped along by a pair of flags against the Jackets. The Raiders got 33 yards on a busted play and scored on a 19-yd. run as they had 70 yards rushing in the drive. For the rest of the night, the Raider offense managed only 105 yards rushing, most of which came in the fourth quarter.
The Yellow Jackets wasted no time responding as they marched 55 yards in eight plays to get on the board. A penalty against Bacon on a 9-yd. Aahiyus Allen run moved the ball to the Raider 31. Austin Wood then followed the blocking of Chaston Googe and broke a couple of tackles to pick up 17 yards to the 14. Four plays later, Allen cut off a block from Nate Lewis to score from three yards out. Placencia then had a rare missed P.A.T. boot as Bacon maintained a 7-6 lead.
On their next possession, the Jackets took the lead for good, going 74 yards in nine plays. The big plays in the drive were a 28-yd. run by Allen, an 18-yd. pickup by Wood on the very next play and a 5-yd. pass from Britt Metts to Jashaun Kirby for the TD. Allen ran for the 2-pt. conversion to make it 14-7.
It took the Jackets only three plays to score again. The drive started with one of Allen’s best runs of the season as he broke away from seven tacklers in picking up 28 yards. But a flag nullified the run, moving the ball back to the Bacon 48. Greg Chambers, who drew the 15-yd. flag, atoned for his action on the next play, taking a short pass from Metts, breaking a tackle and racing 44 yards to the Raider four yard line. Allen scored on the next play. On the P.A.T. attempt, Cade Walters threw to Bradley Owens for the 2-pt. conversion but the officials ruled Owens was out of bounds so the score remained 20-7.
The Jackets started at their 21 on their next possession and marched to the Bacon 24 before a dropped pass and a pass incompletion force Placencia to try a 40-yd. field goal. The kick came up well short and, for the first time in the game, the Jackets failed to score on a possession.
The Jackets got another chance to score before halftime as the Raiders went for it and failed on fourth down at their own 29. Michael Dotson scored on the first play, taking an end around reverse for 29 yards with Metts leading the interference against the only Raider with a chance to stop Dotson. Placencia made it 27-7 with his toe.
The Jackets made one other deep run into Raider territory before the half but a penalty nullified a fake punt play on 4th down in which Walters picked up the first down.
The half ended with the Jackets holding a 27-7 lead.
Jeff Davis scored on its first drive of the second half, going 65 yards in seven plays, all on the ground. Wood had back-to-back runs of 10 and 14 yards in the drive and Kirby finished the march with back-to-back 13- and 12-yd. runs. On the TD run, Kirby went straight up the middle and bowled over three would-be tacklers to go into the end zone standing up. Placencia’s extra point kick barely missed to the left and the score stood at 33-7.
The Raiders had to punt out of their end zone on their next possession and a high snap resulted in giving Tre Chandler time to partially block the punt, putting the Jackets in business at the Bacon 14. Kirby scored on the first play, going off his left side, side-stepping a tackler and racing into the left corner of the end zone standing up. Orlando Payan kicked the extra point to up the score to 40-7.
The Jackets marched 50 yards in seven plays the next time they had the ball, with the Jacket coaching staff beginning to substitute with the game still in the third quarter.
Zion King had a 17-yd. run to start the drive with Conner Rea on to run the offense at quarterback. Chandler took the ball up the middle for a 10-yd. run and Owens ran for 12 on two carries. Kirby capped the drive with a 3-yd. run. Payan booted the extra point to make it 47-7 at the end of three quarters.
With the mercy clock running in the fourth quarter, there wasn’t time for much action. Bacon did make a first down on a pass play and picked up another on a penalty, the only first downs they had in the game after their opening drive. They scored on a 46-yd. run to cut the score to 47-14.
After a failed onside kick, the Jackets took over at the Bacon 48. King had a 20-yd. run and Landon Roberson scored on a 5-yd. run. Angel Mendez came on to kick the extra point to make it 54-14.
The Yellow Jackets had 432 yards of total offense, 380 on the ground and 52 through the air. Allen rushed 13 times for 117 yards and two touchdowns, Kirby ran 13 times for 85 yards and two touchdowns, Wood picked up 71 yards on seven carries and Dotson had a 20-yd. TD run.
The JD defense held Bacon to 175 yards rushing and 25 passing for 200 total yards.
Walters led the defense with four solo tackles and three assists.
Score by quarters:
BCHS 7 0 0 7 -14
JDHS 14 13 20 7 -54