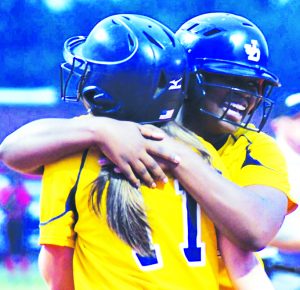 Dee Wooten is happy after hitting a homer 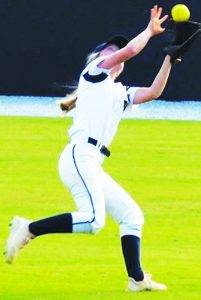 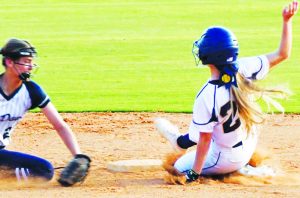 Jeff Davis High’s softball team snapped a 3-game losing skid last week and won again Monday to get two crucial Region 2-AA victories that were key to the Lady Jackets making the state playoffs.
Last Tuesday they got a 5-4 win over Toombs County in Hazlehurst and Monday they traveled to Metter and came back with an 11-5 victory.
Earlier in the season the Lady Jackets had an uncomfortable practice of dropping games in the late innings. But they reversed that trend over the last week, surviving a comeback bid by Toombs County and striking late to turn a 4-4 tie into an 11-4 lead in Monday’s game in Metter.
The games left Jeff Davis with a 7-5 region record and 10-11 overall.
Against Toombs, the Lady Jackets held 4-1 and 5-2 leads, the latter going into the top of the final inning. The Lady Bulldogs scored a pair of runs in the seventh to make the game close.
Toombs took a 1-0 lead in the top of the first with an unearned run.
JD scored two runs in the second, as Karlie Watson got a two-out single and went to second on a bunt single by Allie Lytle. Jakhia Greene followed with a double to left to drive in Watson and Lytle.
The Lady Jackets made it 4-1 in the third. Dee Wooten was safe on an error and Fefe Greene followed with a triple to plate Wooten. Alicia Lilliott then lofted a sacrifice fly to right to score Greene.
Toombs cut the lead to 4-2 win the sixth but the Lady Jackets got the run back in the bottom of the inning. Lytle got her second bunt single, went to second as Jakhia Greene grounded out. After Paige Carter singled, Wooten doubled to left to score Lytle.
After an intentional walk to Fefe Greene, the bases were loaded with one out. But Toombs got out of the inning with a force out at home and a pop out.
A pair of errors gave Toombs a pair of unearned runs in the top of the seventh.
Wooten went 3-for-4 with a double, two singles and an RBI to lead the Lady Jackets at the plate. Carter and Lytle both had a pair of singles, Fefe Greene tripled and drove in a run, Jakhia Greene had a 2-run double, and Lillie Beth Hughes, Georgia Roberts and Karlie Watson each had a single.
Kelsey Parlor pitched all seven innings, giving up one earned run on four hits, walking none and striking out three.
Against Metter, the teams were tied 4-4 going into the top of the sixth inning. That’s when JD erupted for six runs to go up 10-4. They added an insurance run in the top of the seventh and Metter scored once during their last at bat as Jeff Davis won 11-5.
Trailing 3-0 entering the third inning, Jeff Davis put two runs on the scoreboard. Jakhia Greene walked and went to third on a Carter single. Both scored to make it 3-2.
In the fifth, the Lady Jackets took the lead with two runs. Fefe Greene and Poole led off the inning with walks and Roberts singled to score Greene. Torres laid down a bunt single to load the bases and Hughes hit a sac fly to score pinch runner Brianna Schroeder.
After Metter tied it 4-4, the Lady Jackets blew the game open in the sixth. A walk to Wooten and singles by Fefe Greene, Poole and Roberts put JD up 5-4. Greene scored on a wild pitch and Hughes followed with a 2-run single to make it 8-4. Hughes worked her way to third on two passed balls and scored on a ground out by Watson. With the score 9-4 and two outs, the Metter pitcher walked Jakhia Greene and Carter. Greene went to third on a passed ball and scored on another passed ball to make it 10-4.
A Carter single in the seventh scored pinch runner Riley Mathis to make it 11-4.
Roberts had a career night at the plate, going 3-for-4 with three singles and driving in two runs. Jakhia Greene, Torres and Poole each had a pair of singles, Hughes singled, had a sacrifice fly and had three RBI, and Carter, Wooten and Fefe Green each had a single.
Parlor went the distance on the mound. She gave up five runs on 10 hits, walked none and fanned six.
Score by innings:
TCHS 1 0 0 0 0 1 2 -4
JDHS 0 2 2 0 0 1 x -5