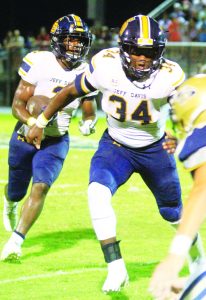 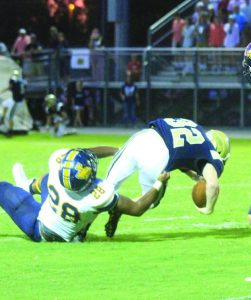 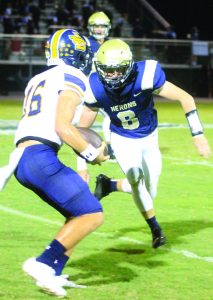 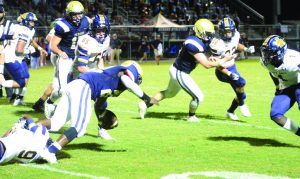 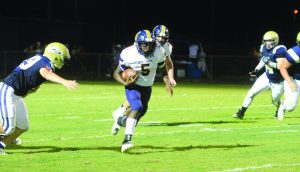 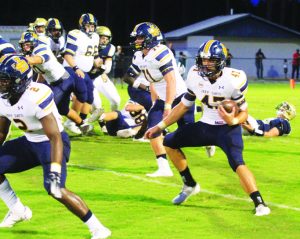 Friday night’s 7-0 Jeff Davis High victory over Brantley County was a battle of defenses from start to finish and the two unbeaten teams slugged it out from start to finish with the Yellow Jackets’ second quarter touchdown the only score of the game.
The Herons came into the game 2-0 while the Jackets were 3-0. Brantley was averaging 31 points a game and was held to zero. The Jackets were averaging 41 points and were held to seven.
While the Jackets had six drives into Heron territory, Brantley only crossed midfield three times as they never seriously threatened to score. Brantley’s deepest penetration was to the Yellow Jacket 25 on their second possession of the game. Their other forays into JD territory ended at the 34 and 44.
Meanwhile, the Jackets had the scoring drive, a march to the Heron one and two more drives to the Brantley 20.
Jeff Davis kicked off to Brantley to start the game but on the second play of the possession, Cade Walters came in to nail a Heron runner for a loss and then Walters tipped a pass at the line and Caleb Parlor made a diving interception of the tipped ball and the Jackets were in business at the Brantley 38. The Jackets picked up a first down on an 8-yd. Aahiyus Allen run to the 23 but they could get no closer than the 20. Audiel Placencia came on to try a 37-yd. field goal but his kick missed right.
Brantley then enjoyed some offensive success as they moved the ball to the Yellow Jacket 25. But that’s where the drive ended as Darrell Mincey blew through the line to nail a runner for a 3-yd. loss and Tyson Alls broke up a 4th down pass as JD took over at their 28.
The Jackets quickly moved the ball back into Heron territory primarily on runs by Austin Wood. They overcame a holding penalty and a 15-yd. pass completion moved the ball to the Brantley 35. But JD could only get to the 27 where Brantley took over early in the second quarter.
The Jackets started their scoring drive from their own 28 and wasted little time getting on the scoreboard. On the first play, quarterback Britt Metts kept the ball for a 22-yd. run to midfield. Metts then hit Greg Chambers for 13 more yards to the 37. After an 8-yd. pickup by Jashaun Kirby, Allen was freed up by a Nate Lewis block for a 24-yd. jaunt to the five. Allen then took it across the goal line for the score. Placencia kicked the P.A.T. and Jeff Davis had its 7-0 lead.
After a long punt and a penalty, the Jackets started their next possession at their own six. A nifty, tackle-slipping run by Allen and a 12-yd. run by Cedric King moved the ball out to the 32 but the Herons picked off a Metts pass and took over at the JD 42.
After a 5-yd. walkoff against the Jackets moved the ball to the 37, the Jacket front wall fought through to nail a runner for a 2-yd. loss and the Herons turned the ball over at the Jacket 34.
Metts then knelt on the ball to end the first half with Jeff Davis on top 7-0.
On their first possession of the second half, Brantley fumbled the ball away on their first play with Zion King jumping on the loose ball at the Brantley 48.
Allen got six and Kirby ran for five and a first down. Kirby then got four and Wood sprung Allen with a block for nine more yards and a first down at the Heron 24. But the Jackets could get no closer than the 20 as a holding penalty backed them up and when Placencia lined up for a 44-yd. field goal attempt, a 5-yd. penalty moved them out of field goal range so Walters had to punt the ball away.
Starting at their own 21, Brantley put together its longest possession of the game, a 9-play possession that ended at the Jacket 44 when an attempted quick kick hit the back of a Heron blocker and the Jackets took over at the Brantley 32.
An 11-yd. Allen run moved the ball to the 21 as the third quarter came to a close.
Wood then got nine and five to put the ball at the Brantley eight. But a holding call moved the ball back to the 25. Kirby then picked up six and Allen carried for 10 more to Heron nine. After Wood got eight, the Jackets faced 4th-and-goal at the one. But the Heron defense held at they took over at their own one.
Brantley moved the ball out to their 39 but had to punt the ball away with time running short.
The Jackets held onto the ball for the remainder of the game, thanks to an 18-yd. run by Allen. With time running out, Metts knelt on the ball but the Herons hit him after he was down, drawing a flag and a 15-yd. walkoff. They did the same thing on the next play, drawing another personal foul penalty but by then the time had run out.
Score by quarters:
JDHS 0 7 0 0 -0
BCHS 0 0 0 0 -0