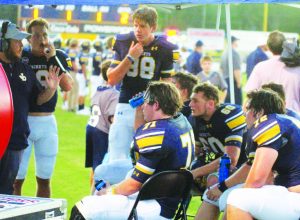 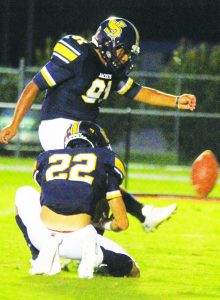 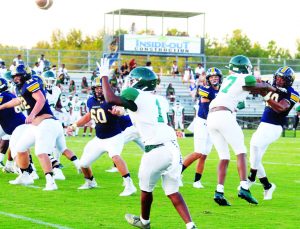 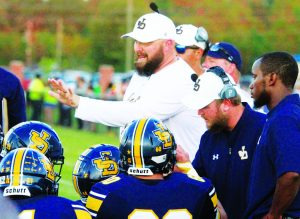 It wasn’t pretty, but Jeff Davis High took a 22-14 win over visiting Windsor Forest of Savannah Friday night to improve to 2-0.
Penalty flags flew from start to finish during the contest as both teams suffered infractions that hurt their efforts, especially the Knights. And Windsor Forest’s fourth quarter scoring drive was aided by a pair of 15-yd. walk-offs against the Jackets.
Things got off to an ominously bad start for the Jackets as, on the first play from scrimmage, a missed handoff resulted in a 6-yd. sack of quarterback Britt Metts. Metts bounced back with a 15-yd. completion to Austin Wood and Tre Chandler picked up the first down with a 3-yd. run up the middle. But the drive fizzled and the Jackets punted the ball away.
The Jackets got an excellent opportunity to score on their next possession as a short punt gave JD the ball at the Windsor 31. On the second play, Wood dashed through a huge hole for 13 yards to the Knights’ 16. Metts then hit Greg Chambers with a 15-yd. completion but the ball was stripped from Chambers’ grasp and the Knights recovered at their own two.
After a 2-yd. run the first of many flags was tossed against Windsor, putting them back at the two. On the next play, the Knights tried a sweep but Wood burst through from his linebacker position to grab the runner in the end zone and Michael Dotson joined him for a safety and a 2-0 Jeff Davis lead.
Dotson returned the Knights’ kickoff to the Windsor Forest 42 to begin the Jackets first TD drive. Metts and Wood had 7- and 6-yd. runs to move the ball inside the 30. After Chandler got seven, the Jackets got their first penalty of the game. But Bradley Owens raced for a 10-yd. pickup and a first down at the 17. Three plays later, Aahiyus Allen picked up 11 yards to the two and two plays later Chandler scored from a yard out. Audiel Placencia kicked the P.A.T. and Jeff Davis led 9-0 early in the second quarter.
Then the flags really started flying with penalties called on five of the next eight plays. In between, Cedric King and Wood came up with quarterback sacks and Windsor had to punt the ball away.
Starting at the Knight 42, the Jackets drove to paydirt with two penalties during the drive and two more on the extra point. The big play in the drive was a 15-yd. Allen run with 15 more tacked on for a facemask infraction. Three plays later, Wood scored on a 7-yd. run. Placencia missed the extra point attempt but a flag against the Knights moved the ball half the distance to the goal so Coach Lance Helton opted to go for a 2-pt. conversion. But a flag against the Jackets put Placencia back on the field and this time he split the uprights to make it 16-0.
On the first play after the kickoff, the Knight quarterback rolled right and Wood caught up with him for what looked to be a 5-yd. loss. But when Wood slung the runner toward the sidelines, he somehow maintained his footing and raced down the right sidelines all the way to the end zone for a 71-yd. TD. The 2-pt. attempt failed and the score was 16-6.
That score stood until halftime.
The Jackets’ second half kickoff was an onside kick and Peyton Laney recovered for the Jackets at the Knight 41. But the Jackets couldn’t capitalize and a personal foul penalty pushed them back as they punted from the Knight 49.
On their next possession, the Jackets went 67 yards in six plays. The big plays in the drive were runs of 17 and 14 yards by Allen and a 25-yd. scoring run by Owens. On the 17-yd. run Nate Lewis threw the key block and Allen broke a tackle on his own. Lewis again threw the key block on Allen’s 14-yd. scamper. On the scoring run, Chasten Googe and Conner McLoon cleared the defenders for Owens’ score. Placencia’s kick was wide right and the Jackets led 22-6.
Penalties and a rock-solid defensive front foiled the Knight’s next possession. Charles Stegall and Darrell Mincey combined for a tackle for a loss, and Tyson Alls and King had another tackle for a loss.
On Windsor’s final scoring drive of the night, the quarterback scramble was their best offense. Plus two 15-yd. penalties against the Jackets helped the drive. The score came on a 38-yd. halfback pass and the 2-pt. conversion cut the score to 22-14.
On the first play after the kickoff, Owens broke several tackles for a 30-yd. run into Knight territory. From there, the Jackets were able to run out the clock to preserve the win.
The Yellow Jacket defense held Windsor Forest to 198 total yards, 107 rushing and 91 passing. Of the 107 yards rushing, 71 came on one touchdown run. Caleb Parlor led the defense with six solo tackles, three assisted tackle and two tackles for losses. For the Jackets’ first two games, Parlor, a senior linebacker, leads the team with 13 solos, five assists and three TFLs.
Offensively, the Jackets rushed for 261 yards, passed for 29 for a total yardage of 290.
For the two-game season, the Jackets have 586 total yards, 463 on the ground and 123 through the air.
Austin Wood has 128 yards and two touchdowns on 14 carries, Bradley Owens has 115 yards and two TDs on 12 carries, Tre Chandler has rushed 19 times for 72 yards and two touchdowns, and Aahiyus Allen has 21 carries for 120 yards.
Senior fullback Jashaun Kirby, who had 738 yards rushing and nine touchdowns as a junior, has been injured and has yet to run the football.
Britt Metts has completed 10-of-12 passes for 123 yards and three touchdowns. His accuracy has been exceptional. He has only one throw off the mark as one of the two incompletions was dropped.
Greg Chambers has been Metts’ main target with four catches for 53 yards and Michael Dotson has two receptions for 43 yards and a touchdown.
Score by quarters:
WFHS 0 6 0 8 -14
JDHS 2 14 6 0 -22