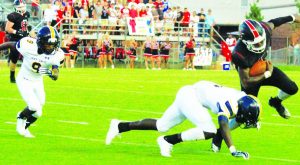 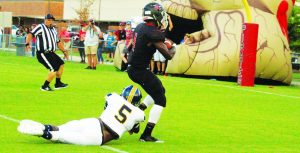 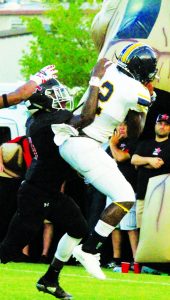 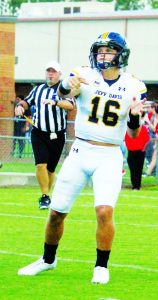 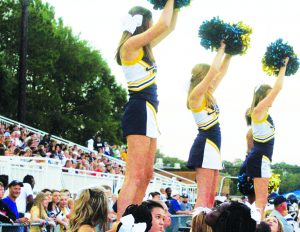 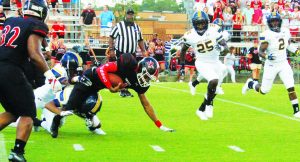 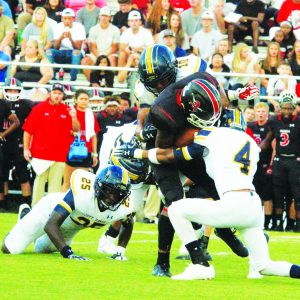 Appling County outscored Jeff Davis 21-0 last Friday in the final pre-season scrimmage in practice marred by penalties. A lot of the Pirate offense came on broken plays, including a 54-yd. scoring run after a bad snap.
The Jackets took the opening kickoff but were unable to move the chains and Britt Metts booted a 44-yd. punt to the Pirate 46. From there, Appling marched 54 yards in eight plays.
With a 1st-and-10 at the JD 13, a high snap backed up the Pirates 22 yards to the 35. A penalty backed them up five yards but, on 3rd-and-27, an Appling receiver got behind the secondary and the quarterback threw him a strike for a 40-yd. touchdown. The extra point kick made it 7-0.
After the ensuing kickoff, the Jackets put together an 11-play drive from their own 26 to the Appling 21.
The big plays in the drive were a 13-yd. sideline pass from Metts and an 18-yd. run by Austin Wood who broke tackles and ran over players, taking the ball to the Appling 39. But the Jackets could get no closer than the Pirate 21 and on 4th-and-4 early in the second quarter, Audiel Placencia missed on a 32-yd. field goal attempt.
After an exchange of punts, the Pirates put together a long, clock-eating drive starting at their own 43. They made it to the Jacket 26 but could get no further.
The Pirates’ second score came on a fluke play on 2nd-and-10 from the Appling 46. A high snap caused the Pirate quarterback and the intended runner to juggle the ball four times before the quarterback got control, dashed around his left end and went 54 yards for the score. The kick made it 14-0.
The Jackets picked up a couple of first downs on their next possession. The offensive line began carving out holes and Aahiyus Allen picked up seven, and then bulled his way for five more and a first down. After Metts hit Tre Chandler for a 9-yd. pickup, Chandler ran for 2 more and another first down. But a dropped pass, a 7-yd. sack and a 5-yd. sack put the Jackets in a deep hole. However, a 15-yd. walk off against the Pirates made it 3rd-and-6. After that, Metts was flagged for intentional grounding and on 4th down he had to punt the ball away.
Appling started at their 36 and went 64 yards in 12 plays to make it 21-0.
From there on out the Jayvees from both teams took over. With Conner Rea running the offense, the young Jackets had some bright offensive moments, moving the ball deep into Pirate territory. But the march fizzled and Placencia missed again on a field goal attempt.
The young Pirates also showed some promise as they, too, marched deep only to have penalties keep them out of the end zone.
This week, the game will be for real as the Jackets host Glenn Hills in the season opener for both schools.