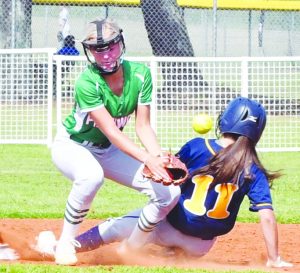 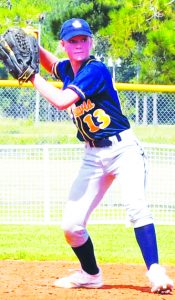 Jeff Davis High’s 2019 softball season got off to a delayed start after the team’s first two games — against Appling County and Bacon County — were rained out.
The Lady Jackets played Saturday in the Tattnall County Tournament, defeating Pinewood Christian Academy 7-2 and falling to Bulloch Academy 14-2, and took a 7-5 win over Pierce County Monday in Blackshear.
Last Thursday, Jeff Davis did get the game underway against Bacon County in Alma but, in the second inning, the rains came with JD holding a 1-0 lead. The Lady Jackets’ run came on a Georgia Roberts 2-out single that scored Dee Wooten who had doubled and went to third on a fielder’s choice.
Against Pinewood Christian Academy, the Lady Jackets used a 6-run fourth inning to propel them to the 7-2 victory.
In the bottom of the third, Wooten hit a solo homer over the center field fence to stake Jeff Davis to a 1-0 lead.
In the big fourth inning, Allie Lytle had a one-out single, Karlie Watson walked and Jakhia Green got a bunt single to load the bases. Fefe Greene then singled to left to drive home Lytle and Watson. After Wooten walked to load the bases again, Paige Carter ripped a double to left to drive home the two Greenes and move Wooten to third. Annalese Poole came on to pinch hit and singled to score Wooten and Carter to make the score 7-0.
Carter led the offense, going 3-for-3 with a double, a triple and two RBI. Lytle singled and doubled, Wooten had a solo homer, Fefe Greene singled and drove in two runs, Poole had a 2-run single, Watson doubled, and Jakhia Greene singled.
Kesleigh Poe was the winning pitcher. She had four no-hit innings before giving up a single in the fifth when a pair of errors allowed Pinewood to score two unearned runs. Poe gave up one hit, walked two, hit three and struck out four. Kelsey Parlor pitched the final inning, blanking Pinewood, giving up no hits, walking none and striking out two.
Against Bulloch Academy, the Lady Jackets found themselves down 14-0 going into the bottom of the fifth inning. Alicia Lilliott led off the bottom of the fifth with a pinch hit double. Jakhia Greene came on to run for Lilliott and an out later, Wooten homered over the left field fence for JD’s only two runs of the game.
Wooten led the offense with a single, a homer and two RBI. Lilliott and Lillie Beth Hughes both had doubles, and Poole singled.
Parlor took the loss on the mound. She went three innings, giving six runs on six hits, walking one, hitting one and striking out two. Cara Edwards pitched 1 1/3 innings, giving up three earned runs on five hits, walking none and striking out one. Bianca Torres pitched 2/3 inning, giving up two runs on three hits, walking none and fanning none.
In Monday’s game in Blackshear, the Lady Jackets were holding a seemingly comfortable 7-1 lead after four innings but the Lady Tigers battled back to make the game closer at 7-5.
Jeff Davis jumped on top early with a 3-run first inning as Pierce committed three errors. The first run came without a hit as Fefe Greene was hit by a pitch, Lytle sacrificed her to second and was safe on an error as Greene went to third. Carter then was safe on an error by Pierce’s shortstop and Greene scored to make it 1-0. An out later Roberts singled to load the bases and then Hughes was safe on an error as two more runs scored.
In the bottom of the inning, with runners on first and second and no one out, Jakhia Greene took a grounder at third, stepped on the bag and threw to first for a double play. But the Lady Tigers’ third single of the inning put them on the board making it 3-1.
In the bottom of the third with runners at first and second with one out, shortstop Carter took a line drive and got the runner at second for a double play to end the inning.
JD scored four in the fourth to go up 7-1. Torres and Watson opened the inning with back-to-back singles. Jakhia Greene sacrificed them to second and third, and Fefe Greene followed with a single to score Torres. Lytle followed with 2-run single to make it 6-1. Carter then singled and Wooten got the Lady Jackets sixth single of the inning to score Lytle to make it 7-1.
Lytle had two singles and two RBI to lead the offense. Roberts singled twice, Fefe Greene, Carter and Wooten each had a single and an RBI, Torres and Watson singled, and Hughes drove in a pair of runs.
Poe was the winning pitcher. She threw four innings, giving up one run on five hits, walking two, hitting one and striking out one. Parlor pitched the final three innings, giving up four runs on five hits, walking none, hitting one and striking out one.
Score by innings:
PCA 0 0 0 0 2 0 -2
JDHS 0 0 1 6 0 x -7