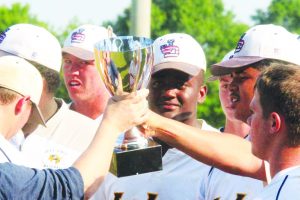 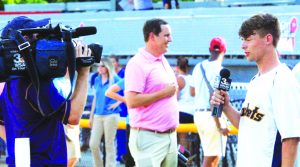 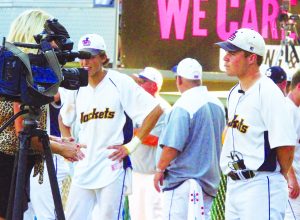 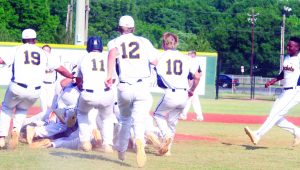 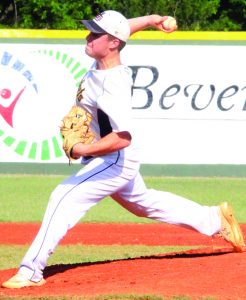 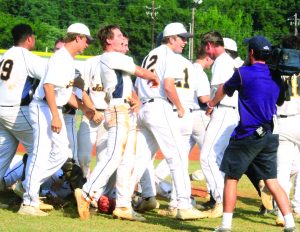 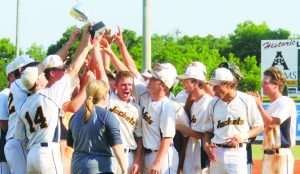 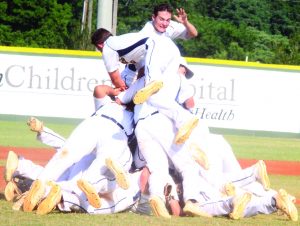 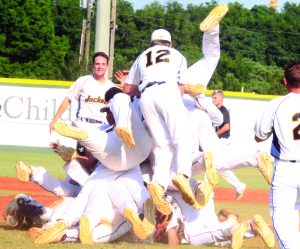 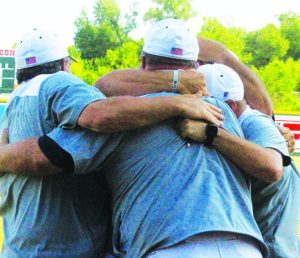 Jeff Davis High rode the 4-hit, shutout pitching of Garrison Miles to its second Class AA State Championship in three years last Wednesday with a 2-0 win over Rockmart High School at Luther Williams Field in Macon.
The game was played before a huge crowd from Hazlehurst as the Jeff Davis fans far outnumbered the Rockmart supporters in a battle of two teams with Yellow Jackets as their mascots. The State Championship trophy puts the state on notice for the 2020 season, as Jeff Davis returns Wednesday’s entire starting lineup, losing only one senior, Kaden Lewis.
In the bottom of the sixth inning, with Jeff Davis up 2-0, Coaches Paul Glass and Steven Wilcox put Lewis in the game as a pinch hitter for the last at bat of his career. That move elicited a stirring ovation from the JD fans as they cheered on Lewis’ appearance.
Jeff Davis finished the year with a 32-7 record while Rockmart finished at 29-11.
The pair of Yellow Jacket teams had split the first two games in Macon last Monday, with Rockmart winning the opener 4-1 and Jeff Davis taking the nightcap 4-2 to set the stage for Wednesday’s third game in the best-of-three series.
Miles controlled the championship game from the beginning as Rockmart never got a runner past second base. Rockmart got two runners on base twice — with a hit batter and a walk in the fourth, and a pair of singles in the fifth. But those were the biggest threats they could mount.
Jeff Davis went ahead in the third inning as Britt Metts singled to center, went to second on a Miles sacrifice bunt and scored on a Hamp Hayes single to put the champs up 1-0.
That score stood until the bottom of the sixth when Caleb Leggett walked and scored all the way from first when Bubby Chaney hit a long single to right.
JD threatened in the bottom of the second with a 2-out rally. Leggett and Chaney had back-to-back singles and Garrett Taylor walked to load the bases. But a strike out ended the threat.
In the top of the seventh, Miles walked the first batter he faced and Coach Paul Glass went to the mound to call on Metts to get the final three outs, which he did with just eight pitches.
The game ended almost exactly as the 2017 State Championship game did. In 2017, the final batter from Elbert County grounded to third baseman Seth Graham who threw to first baseman Chandler Davenport for the last out of the game. Last week, Rockmart’s final batter grounded to third baseman Cade Walters who threw to first baseman Bubby Chaney for the last out of the game.
Chaney’s pair of singles and an RBI led the Jeff Davis offense. Hayes drove in the other run with a single, and Metts, Leggett and Walters all had singles.
Miles was the winning pitcher, going six innings and blanking the Yellow Jackets from Rockmart on four hits. He walked three and did not have a strikeout. Metts earned a save, retiring all three batters he faced.
Score by innings:
RHS 0 0 0 0 0 0 0 -0
JDHS 0 0 1 0 0 1 x -2