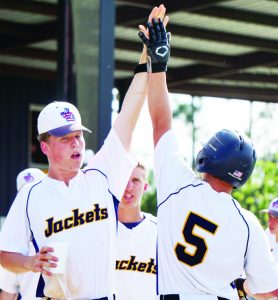 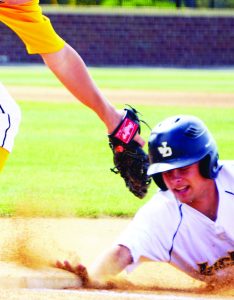 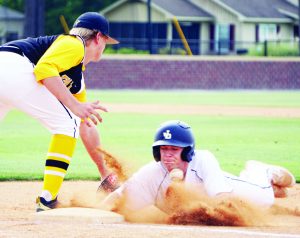 Jeff Davis High swept East Laurens 10-2 and 13-0 last week in the first round of the state baseball playoffs.
The wins improved the Jackets’ record to 24-4 and they host Fitzgerald Thursday in a doubleheader in a best-of-three second round series.
Fitzgerald defeated Jefferson County 11-1, 15-1 last week.
In other action involving Region 2-AA teams, Vidalia topped Washington County, 2-3, 11-4, 10-2; Bacon County defeated Dodge County 4-1, 11-6; and Metter lost to Bleckley County 8-7, 4-0. Vidalia travels to Harlem this week and Bacon will be at Thomasville.
In last Wednesday’s first game, the Jackets spotted East Laurens to a 2-0 lead before erupting for seven runs in the bottom of the fourth inning to turn the game around.
The Falcons runs came in the third inning on three singles, a walk and a hit batter. But after that, starting pitcher Garrison Miles retired the next six Falcon batters in order and reliever Cole Baucom put down the following six in order.
The Jackets’ big fourth inning featured a single by Miles, doubles by Jashaun Kirby and Garrett Taylor, and a two-run homer by Britt Metts. Two walks, a hit batter and two Falcon errors helped the 7-run outburst.
In the fifth, a walk, an error and a hit batter loaded the bases and a wild pitch and Cade Walters’ sacrifice fly to center gave JD a 9-2 lead. A walk and a Colby Marchant single loaded the bases again and Metts was hit by a pitch to drive in another run for a 10-2 lead.
That score stood as Miles and Baucom mowed down the Falcon batters in order.
Marchant was 3-for-4 with an RBI to lead the batting. Kirby, who returned to the lineup after recovering from a broken finger, picked up where he left off before the injury with a single and double. Taylor had a single and double and two RBI, Miles had a pair of singles and an RBI, Metts homered and drove in three runs, and Bubby Chaney doubled.
Miles went five innings, giving up two runs on four hits, walking two and striking out seven. Baucom earned a save, retiring all six batters he faced, four by strikeout.
The second game started slowly as Jeff Davis led only 1-0 after three innings. But JD scored three in the fourth and nine in the fifth to run-rule the Falcons 13-0.
The Jackets scored once in the first inning as Marchant ripped a 2-out double and Metts followed with a single to score courtesy runner Braydon Creech from second.
In the fourth, Hamp Hayes was hit by a pitch, advanced to second on a Caleb Leggett sacrifice bunt and scored on a double by Chaney. Walters then singled to score Chaney and went to second on the throw. Taylor then singled to score Walters to make it 4-0.
The fifth was a wild inning as the first six Jacket batters reached base. Miles, Marchant and Metts had consecutive singles with Miles scoring on an error. Kirby was hit by a pitch to load the bases and Hayes and Leggett drew back-to-back bases-loaded walks to make it 7–0. After a strikeout, Walters drew a bases-loaded walk, Hayes scored on a wild pitch and Taylor walked to load the bases again. Miles then blasted a 3-run double to up the tally to 12-0. Miles went to third on a wild pitch and Marchant grounded out to short to score Miles.
Miles’ single, double and three RBI led the offense. Marchant had a single, a double and an RBI, Metts had a pair of single and an RBI, Chaney doubled and drove in a run, Walters singled and drove in two runs, and Taylor singled and had an RBI.
Matthew White pitched a complete game, 3-hit shutout to lower his earned run average to 0.304, as he has given up only one earned run in 23 innings on the mound. He did not issue a free pass and struck out four. Of the 18 batters he faced, he threw 17 first-pitch strikes.
Score by innings:
ELHS 0 0 2 0 0 0 0 – 2
JDHS 0 0 0 7 3 0 x -10