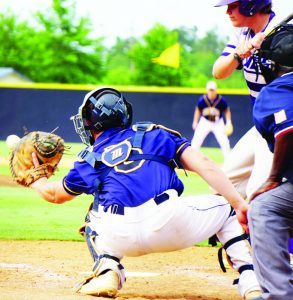 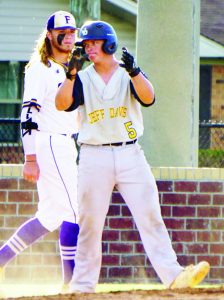 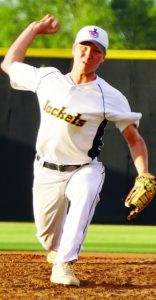 Jeff Davis High’s baseball team got a scare in last week’s playoff action as the Yellow Jackets won two of three close games to take the 3-game series. JD opened with a come-from-behind 5-3 win, fell 3-2 in the second game and then hung on for a 3-2 win in the series finale.
The Jacket bats were disturbingly quiet in the series as the Hurricanes out-hit Jeff Davis in all three games. JD managed on 14 hits in the three games while Fitz had 20.
But the Jackets made the plays when they needed them. Over the three games, the Jackets had three errors while Fitzgerald had nine, four of which came in the final game as all three of JD’s runs were unearned.
In the opener, the Hurricanes scored two runs in the top of the first inning and still led 2-1 entering the fifth inning. That’s when the Jackets erupted for four runs and then held off Fitzgerald for the remainder of the game to win 5-3.
Fitzgerald’s two first inning runs came after starting pitcher Caleb Leggett struck out the first two batters he faced. A throwing error allowed the Canes to score two unearned runs.
Jeff Davis got on the board in the fourth as Colby Marchant doubled. Courtesy runner Ethan Hulett ran for Marchant, made his way to third and scored on a dropped third strike to Britt Metts.
In the fifth, the Jackets staged a 2-out rally. Garrison Miles and Marchant started things with back-to-back walks, with Hulett coming on to run for Marchant. Then the Hurricane catcher threw to first to try to catch Hulett off the base. But the first baseman couldn’t get a handle on the ball and the left fielder failed to back up the play, sending the ball into the right field corner. Miles scored from second to tie the game 2-2 and Hulett advanced to third. Then Britt Metts singled to center to score Hulett and Jashaun Kirby followed with a 2-run homer over the left field fence to give the Jackets a 5-2 lead.
In the sixth, Fitz got its third unearned run of the game to account for the final score.
The Jackets were out-hit 5-4 but made the most of their opportunities. Kirby had a homer and two RBI, Marchant doubled, Metts singled in a run, and Leggett singled.
Leggett started on the mound and took the win. He went five innings, giving up three hits, walking three and striking out 10 as he continued to be the Jackets’ strikeout leader.
Baucom pitched an inning, giving up one hit, walking one and striking out two. Metts closed out the seventh, giving up a harmless hit and striking out three to earn a save.
In the second game, the Jackets again managed only four hits, a triple by Caleb Chaney and singles by Leggett, Miles and Cade Walters.
The Jackets got on the board first with a run in the second inning. With two outs in the inning, Chaney ripped a triple to right field and scored on a throwing error to put JD up 1-0.
Fitzgerald went up 2-1 in the third on a walk, a triple and a single.
Fitzgerald opened the fifth with a single but, when the runner tried to steal second, Marchant gunned him down from his catcher position. Another single chased starting pitcher Matthew White as Cole Baucom took the mound. He struck out the first batter he faced but a walk and a single gave Fitzgerald a 3-1 cushion.
But the Jackets didn’t quit. In the top of the final inning, with one out, Garrett Taylor, Miles and Marchant drew walks to load the bases. A strikeout later, Taylor scored on a wild pitch to make it 3-2 and Kirby drew a walk to load the bases again. But a strikeout ended the game.
White was the losing pitcher. He went 4 1/3 innings, giving up three runs on six hits, walking three and striking out four. Baucom pitched 1 2/3 innings, giving up no runs on two hits, walking three and striking out two.
The Jackets were out-hit 7-6 in the final game but Miles held Fitzgerald at bay for most of the game and had a 5-hitter going into the final inning.
The pitchers controlled the first three, scoreless innings as the Jackets managed a double and a single, and the Hurricanes had a pair of singles. But all the runners were left stranded.
In the fourth, Jeff Davis, playing as the visiting team, struck for a pair of unearned runs as Miles and Marchant reached on back-to-back fielding errors by the Fitz pitcher. Braydon Creech came on to run for Miles, and scored on a third error by the pitcher. After a pair of strikeouts, Leggett singled to center to score Kaden Lewis who was running for Marchant.
Fitzgerald got a run back in the bottom of the inning to make it 2-1.
In the sixth, the Jackets got a huge insurance run to go up 3-1. That run, too, was unearned. A Kirby walk and a Hamp Hayes sacrifice bunt put Kirby on second. Leggett reached on an error, advancing Kirby to third. After a pop fly for the second out, Walters singled to score Kirby.
In the bottom of the seventh, it was Fitzgerald’s turn not to quit. With two outs, back-to-back triples gave the Hurricanes a run with the tying run on third.
Head Coach Paul Glass put Metts on the mound and the junior earned a one-pitch save as the Fitzgerald batter popped up the first pitch into foul territory near the Fitzgerald bench. Walters caught the ball at the fence to end the ball game and give the Jackets the series.
Hayes and Metts both doubled, and Taylor, Marchant, Leggett and Walters had singles. Leggett and Walters both had an RBI.
Miles was the winning pitcher. He went 6 2/3 innings, giving up two runs on seven hits, walking none and striking out six. Metts earned his save, getting the final out on the first pitch pop foul.
Score by innings:
Fitz 2 0 0 0 0 1 0 -3
JDHS 0 0 0 1 4 0 x -5