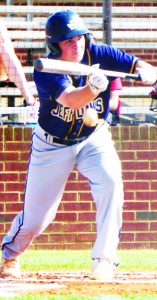 Jeff Davis High School’s baseball team has advanced to the Final Four of the Georgia High School Association Class AA State Playoffs for the third straight year, sweeping Social Circle 6-4, 11-1 last Wednesday in Social Circle.
The Yellow Jackets took on Bleckley County yesterday (Tuesday) in Cochran to begin the best-of-three series with a shot at making the championship game next week.
Rockmart hosts Callaway in the other semifinal matchup.
Over the last three years, Jeff Davis has been in the semifinals three times, Callaway twice, and Bleckley and Rockmart are in the semis for the first time.
In the first game Wednesday in Social Circle, Caleb Leggett and Redskin pitcher Chandler Ball were involved in a pitchers’ duel through the first four innings which ended with the score tied at 1-1. In the top of the fifth, the Jackets struck for four runs to break the game open.
Cade Walters and Britt Metts started the fifth with back-to-back singles, putting runners on first and third. Garrison Miles then grounded a fielder’s choice to second base to score Walters. After Colby Marchant drew a 4-pitch walk, Jashaun Kirby singled to score Miles from second. Kirby advanced to second on the throw and courtesy runner Braydon Creech went to third. After a strikeout, Leggett singled to left to score both Creech and Kirby, making it 5-1.
Leggett began to struggle in the fifth, as Social Circle drew a pair of walks followed by back-to-back singles to move the score to 5-2. Cole Baucom went to the mound and the first batter hit to Walters at third who threw to Marchant at the plate to get the first out of the inning. The next batter grounded to short for a 6-4-3 double play to end the uprising.
The Jackets got their final run in the sixth as Garrett Taylor singled, went to second on a Walters sacrifice bunt, and scored on a Metts double.
Jeff Davis’ first run came in the top of the first as Metts reached first on a dropped third strike, was sacrificed to second by Miles, and scored on a Marchant fielder’s choice thanks to an errant throw to first.
Metts led the offense with a double, a single and an RBI. Leggett had a pair of singles and two RBI, Taylor singled twice, Kirby drove in a run with a single, and Miles and Marchant both drove in a run.
Leggett was the winning pitcher, going four innings and giving up two runs on three hits, walking five and striking out nine. Baucom threw 1 1/3 innings, giving up two runs on two hits, walking one and striking out none. Metts pitched the final 1 2/3 innings, earning a save as he blanked the Redskins on one hit, walked one and struck out three.
On defense, Metts, Miles and Chaney combined for two double plays.
In the second game, after spotting the Redskins to a 1-0 lead in the first inning, the Jackets, playing as the home team, scored five in the bottom of the first and never looked back.
Social Circle started the top of the first with hot bats. Three straight one-out singles gave them a 1-0 lead and a fourth single loaded the bases. But then the third Metts-Miles-Chaney double play of the day ended the threat.
In the bottom of the inning, Miles singled, Marchant walked and Kirby followed with a single to score Miles. Hamp Hayes then singled in courtesy runner Creech and Leggett walked to load the bases. Chaney singled to left to score Kirby, Taylor grounded out to push Hayes across the plate, and Walters reached on an error, scoring Leggett but Chaney was thrown out at the plate trying to score from second.
The Jackets added a run in the third as Hayes was hit by a pitch, Leggett and Chaney walked, and Taylor’s popup was mishandled to score Hayes. Confusion ensued when a field umpire called an infield fly ruling, meaning Taylor should have been out. But Leggett, hearing the call, stayed at second while Chaney also went to second and Taylor pulled up at first. After a lengthy discussion by the umpires, Taylor was allowed to stay at first and Leggett was called out.
After that, Walters was hit by a pitch and Metts walked to drive in Chaney, making it 7-1.
Jeff Davis made it 8-1 in the fifth as Metts advanced from second to third on a wild pitch, and then came home on a passed ball.
The game came to an end in the bottom of the sixth as a hit batter and two walks loaded the bases. Then Taylor tripled to right field to clear the bases and end the game on the 10-run rule.
Taylor had a double, a triple and four RBI to lead the offense. Miles, Kirby, Hayes and Chaney each had singles, and Metts, Kirby, Hayes and Chaney each had an RBI.
Matthew White went the distance on the mound, giving up one run on seven hits, walking two and striking out four.
Score by innings:
JDHS 1 0 0 0 4 1 0 -6
SCHS 0 0 1 0 1 2 0 -4