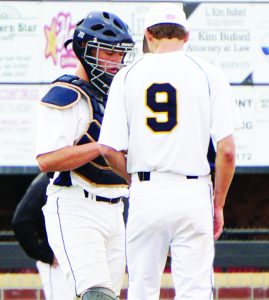 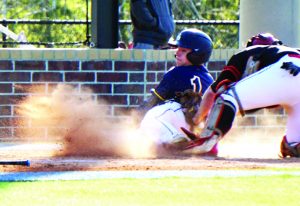 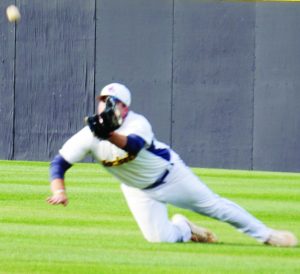 Jeff Davis High’s baseball team improved to 19-2 overall and 11-1 in Region 2-AA with a 3-game sweep of Bryan County last week. But it wasn’t easy.
The Jackets left 12 runners on base in a 10-1 win Tuesday in Hazlehurst and left 14 runners stranded in a 2-1, eight inning win in Hazlehurst Wednesday. In the series finale Thursday in Pembroke, the Jackets did much better, leaving eight runners on base in rolling to a 13-3 victory.
In Tuesday’s 10-1 win, sophomore Matthew White got his first varsity start on the mound and went the distance, putting an exclamation mark on the Jackets’ unusually deep pitching staff.
He gave up one run on six hits, walked one and struck out nine.
The Jackets started quickly with a 6-run first inning highlighted by Caleb Leggett’s 1-run single, a 2-run Britt Metts triple, a run-scoring single by Bubby Chaney, and a run-scoring sacrifice fly by Braydon Creech. The final run came as Garrison Miles reached on an error.
In the third, Miles drove in two runs with a bases-loaded double to up the score to 8-1.
Miles got another RBI in the fourth as he drew a bases-loaded walk to make it 9-1.
And Miles got the final run himself in the sixth as he scored from third on a passed ball.
Miles had a single, a double and three RBI, Metts tripled and had two RBI, Leggett doubled in a run, Chaney, Colby Marchant and Kaden Lewis each singled, and Creech got an RBI on a sacrifice fly.
Wednesday’s 2-1 win was a nightmare. The Jackets’ only runs came on a bases loaded walk and a bases loaded wild pitch. Each time the Jackets had runners in scoring position they couldn’t come up with a hit.
JD’s first run came in the third, as Marchant doubled followed by a Metts double but courtesy runner Ethan Hulett was held up at third. Leggett walked to load the bases and Chaney drew a 4-pitch walk to drive in Hulett and give the Jackets a 1-0 lead.
Bryan tied the game in the sixth.
In the bottom of the eighth, Miles walked to start the inning, Garrett Taylor laid down a sacrifice bunt and was safe at first on an error. Metts was issued an intentional walk to load the bases. And with Leggett at the plate and a 2-1 count, a wild pitch enabled Miles to race to home with the winning run.
The Jackets had six hits, a pair of doubles by Marchant, two singles by Hamp Hayes, a double by Metts, and a single by Miles. Chaney had the only RBI with the bases-loaded walk.
Cade Walters started on the mound and went four innings. He gave up no runs on two hits, walked none and struck out five. Cole Baucom picked up the win in relief. He went four innings, giving up one run on one hit, walking one and striking out eight.
In Thursday’s 13-3 win in Pembroke, Metts had a homer, a double, a single and five RBI with Taylor close behind with a pair of singles and four RBI. On the mound, Miles improved his record to 6-0 with a 6-hit outing.
In the top of the first inning, Miles led off with a single and courtesy runner Jashaun Kirby scored from second on a 2-out Metts single.
Bryan scored three in the bottom of the inning, two of the runs unearned, to take a 3-1 lead. But that was all the scoring for the Redskins.
The Jackets tied the game with two runs in the second. Leggett led off with a double and went to third on a Creech sacrifice bunt. Creech was safe on a throwing error and advanced to second and Leggett scored on the error. Walters then sacrificed Creech to third and Creech scored on a Taylor ground out.
The Jackets broke the game open with a 5-run fourth. Creech walked to start the inning and went to second on Walters’ sacrifice bunt. Miles and Taylor followed with back-to-back singles to score Creech. Marchant drove in another run with a single and Metts drove in two more runs with a double. Metts advanced to third and scored on a wild pitch.
A 2-run fifth upped the tally to 10-3. The Jackets loaded the bases with three walks and Taylor drove in a run with a sacrifice fly. Marchant then singled to drive in another run.
In the seventh, Taylor drove in another run with a single and Metts crushed a 2-run homer into a stiff wind over the left field fence to make it 13-3.
Metts was 3-for-5 with five RBI, Taylor was 2-for-4 with four RBI, Marchant had a pair of singles and two RBI, Miles had a pair of singles, Leggett doubled, and Chaney and Hayes singled.
Miles went five innings on the mound. He gave up one earned run on six hits, walked three and struck out two. Taylor threw the final two innings, giving up two hits, walking none and striking out one.
Score by innings:
BCHS 1 0 0 0 0 0 0 – 1
JDHS 6 0 2 1 0 1 x -10