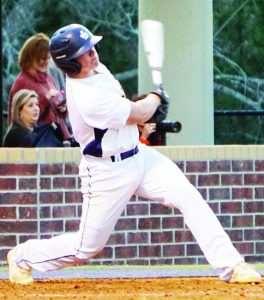 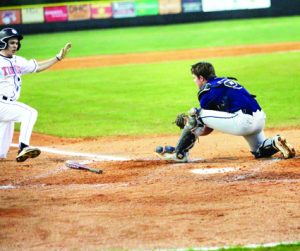 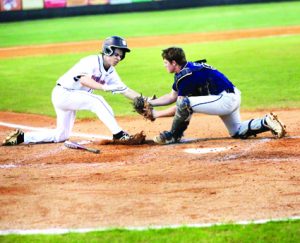 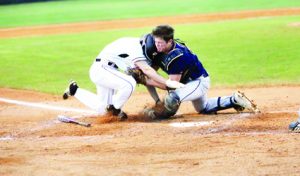 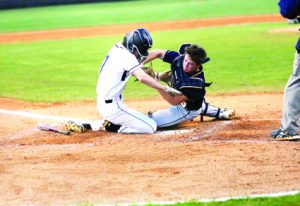 Jeff Davis High played its first Region 2-AA 3-game series last week, sweeping Metter in a series that had to be delayed by rain.
The Jackets opened with a 9-0 win in Metter Thursday, and swept a Friday double-header 14-3 and 9-3.
The Jacket bats were hot as Jeff Davis collected 35 hits in the three games, topped by a 15-hit attack in the finale.
Thursday in Metter, Caleb Leggett struck out 12 Tigers in six innings on the mound as the left-hander dominated the game.
At the plate, Jashaun Kirby and Britt Metts both had 3-run homers.
Leggett started the game by striking out all three batters in the bottom of the first inning. He also struck out the side in the third as he retired the first nine batters he faced, seven by strikeout.
The closest the Tigers came to scoring was the fourth when Leggett walked a batter after retiring 11 straight. The next batter was safe on an error but the runner at first tried to score and was gunned down by Garrison Miles as he threw to catcher Colby Marchant at the plate.
That play erupted a controversy as the runner lowered his shoulder, hitting Marchant with his helmet in the side of the head. A brief standoff between Marchant and the runner brought players and coaches to home plate to defuse the situation. The runner was ejected from the game and had to sit out the first game Friday because of the infraction.
Metter got a runner to third in the fifth with one out but Leggett fanned the next two batters.
Cole Baucom took the mound in relief in the seventh and retired all three batters he faced to preserve the win.
The Jackets had a 6-run third inning as Marchant singled to score Cade Walters from third. Leggett hit a bases-loaded single to score two runs and Metts followed with his homer.
Kirby’s homer came in the seventh with Miles on second with a double and pinch runner Ethan Hulett on first as Marchant walked.
Miles had a double and a single, Kirby and Metts had 3-run homers, Leggett had a 2-run single, Marchant singled in a run, and Caleb Chaney and Kaden Lewis singled.
Leggett went six innings, giving up no runs on one hit, walking two and striking out 12. Baucom retired all three batters he faced.
In the first game Friday, Metter got a pair of runs in the top of the first inning. After the Jackets tied the game in the bottom of the stanza, JD put eight runs on the board in the second to seal the visitors’ fate.
JD sent 12 batters to the plate in the second. Walters tripled to start the scoring, plating Chaney who had singled and went to second on Lewis’ sacrifice bunt. Walters scored on a sacrifice fly by Garrett Taylor. Miles singled, Marchant walked and Kirby singled to left to score pinch runner Baucom to make it 5-2. Metts then walked to load the bases and Leggett drilled a 3-run double to right to up the tally to 8-2. Chaney followed with a triple to score Leggett and Lewis singled to score Chaney for a 10-0 lead.
In the fifth, Metts started the inning with a solo shot over the left field fence.
An out later, the Jackets loaded the bases with three straight walks and Taylor singled in a run followed by a bases-loaded walk to Miles to drive in another run. Walters then scored on a wild pitch for the final run.
Chaney led the offense with a triple, a single and an RBI. Taylor had a pair of singles and two RBI, Metts homered, sacrificed and had two RBI, Leggett had a 3-run double, Walters tripled and had an RBI, Miles, Lewis and Kirby each had a single and an RBI, and Marchant singled.
Miles was the winning pitcher, going five innings and giving up three runs on five hits, striking out one and walking none.
In Friday’s nightcap, the Jackets built a 7-0 lead through three innings and cruised to the 9-3 win.
JD scored four in the bottom of the first inning as Miles doubled and Marchant and Kirby walked to load the bases. Miles scored on a Metts sacrifice fly, Leggett singled to score pinch runner Hulett, and Chaney doubled to center to score Kirby and Leggett.
In the third, Kirby was hit by a pitch to start the inning and two outs later, Chaney doubled to score Kirby. Lewis followed with a double to score Chaney and Walters singled to bring Lewis in to score, making it 7-0.
Metter got three unearned runs in the fourth to cut the score to 7-3.
In the bottom of the inning, Miles singled and scored later on a Leggett single.
The Jackets’ final run came in the fifth as Lewis doubled and scored on a Walters single.
Chaney again led the Jackets at the plate with a pair of doubles and three RBI. Lewis doubled twice and drove in a run, Miles had a double and a single, Leggett had a pair of singles and two RBI, Walters had a pair of singles and an RBI, and Taylor, Matthew Glass, Kirby, Ethan Hulett, and Andrew Aycock all had singles in the 15-hit attack.
Braydon Creech picked up the win on the mound. He went four innings, giving up three unearned runs on six hits, walking two, hitting two and striking out one.
Walters went two innings, giving up no runs on no hits, walking two and striking out one. Baucom pitched an inning, blanking Metter on two hits, walking none and striking out three.
Score by innings:
JDHS 0 0 6 0 0 0 3 -9
MHS 0 0 0 0 0 0 0 -0 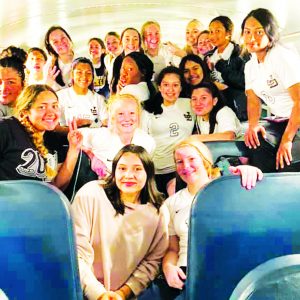 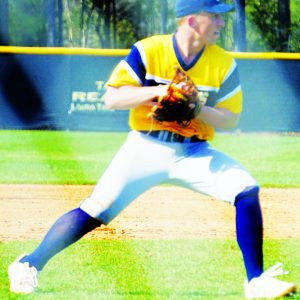 Jayvees win one of three