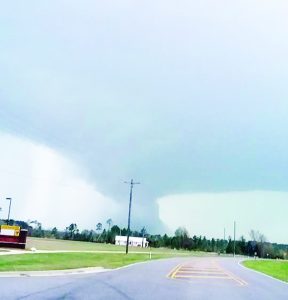 Images circulated on social media over the pass few days were said to be photos of a tornado in Jeff Davis County.
But Jeff Davis County Emergency Management Agency (EMA) Charles Wasdin said the phenomenon was not a tornado but, rather, a wall cloud.
Wikipedia defines a wall cloud as “a large, localized, persistent, and often abrupt lowering of cloud that develops beneath the surrounding base of a cumulonimbus cloud and from which tornadoes sometimes form.”
Wasdin was in periodic contact with the National Weather Service (NWS) during Sunday’s storm which spawned tornadoes across the southeast. His first call to the NWS came as soon as he heard Hazlehurst’s two weather warning sirens automatically sound off. The NWS told him there was rotation above the Hazlehurst area in the atmosphere north of Hazlehurst and south of Lumber City, putting it somewhere close to the Ocmulgee River.
The conditions persisted as the sirens sounded again a half hour or so later.
“It was a wall cloud. A lot of people thought it was a tornado,” Wasdin said, “but it wasn’t. Wall clouds appear to look like a tornado but they’re not.”
Wasdin said the EMA received no reports of damage from Sunday’s storm which dumped 2-3 inches of rain in the Hazlehurst area.