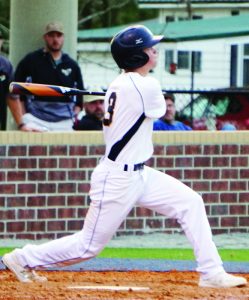 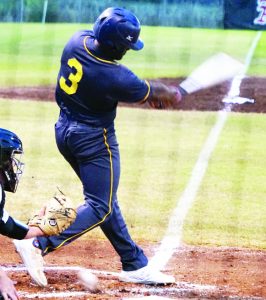 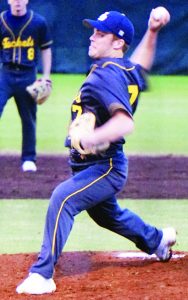 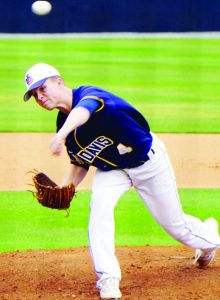 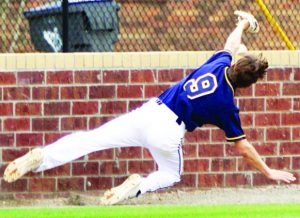 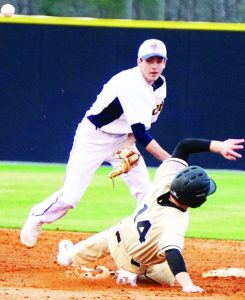 Jeff Davis High’s baseball team got off to an eye-opening start on the 2019 season, as the Class 2A Jackets blanked Class 3A Appling County 10-0 in five innings last Thursday in Baxley behind a no-hitter by Garrison Miles, and took a pair of wins over Class 5A powerhouses Jones County and Wayne County Saturday in a round-robin series in Hazlehurst. JD topped Jones 7-5 and defeated No. 6 ranked Wayne 9-8.
Saturday morning, Caleb Leggett followed up Miles’ no-hit gem with a 4 1/3 inning performance against Jones County, blanking the Greyhounds on one hit and fanning eight.
And the Jacket bats were as impressive as the pitching as Jeff Davis collected nine hits in five innings against Appling, 12 against Jones County and 10 against Wayne County.
Against Appling, after two scoreless innings, the Jackets scored six in the third as 11 batters went to the plate.
Cade Walters started things with a walk and went to second on a Garrett Taylor bunt. After a strikeout, the Jackets staged a 2-out rally. Britt Metts walked and Caleb Chaney was hit by a pitch to load the bases. Colby Marchant walked to drive in Walters for the first run of the game. Leggett then lofted a high fly ball to center that should have ended the inning. But the fly was dropped, scoring Metts and Chaney to make it 6-0. Jashaun Kirby then singled to score courtesy runner Ethan Hulett. Kaden Lewis was hit by a pitch to load the bases again. Walters then singled to score Leggett and Kirby to make it 6-0.
In the fourth, Miles and Metts singled and an out later Marchant singled to load the bases once again. Leggett reached on an error to score courtesy runner Cole Baucom. Metts scored on a single by Lewis to make it 8-0.
In the fifth, Walters and Taylor got back-to-back singles, Miles sacrificed them into scoring position and Metts doubled to score Walters. Chaney then scored Taylor on a sacrifice fly to left.
Metts had a single, a double and an RBI, Walters had two singles and two RBI, Kirby and Lewis each had a single and an RBI, and Taylor, Miles and Marchant all singled. Miles had two sacrifices and Taylor one.
Miles was flawless on the mound, striking out six and giving up no free passes. Only three Pirates reached base, all on errors.
Against Jones County, the Jackets got a run in the first inning as Miles singled, went to second on an error and scored on a Marchant single. They held the 1-0 lead into the bottom of the fourth when JD erupted for six runs.
Six of the first seven JD batters got hits in the fourth. Leggett, Lewis, Walters, Taylor and Miles singled, and Metts greeted a new Greyhound pitcher with a 2-run double that put the Jackets up 6-0.
After a walk and a hit batter, Leggett got his second single of the inning to make it 7-0.
Jones County battled back with three runs in the fifth and two more in the sixth to make it 7-5. But the Jackets held on for the win.
Miles and Leggett both had three singles and drove in a run. Metts had a 2-run double, Taylor, Marchant and Walters each had a single and an RBI, and Caleb Chaney and Lewis both singled.
Leggett blanked the Greyhounds on one hit, walked one and hit two batters in 4 1/3 innings.
Jashaun Kirby pitched 2/3 inning in the fifth, giving up three runs on three hits and a walk.
Braydon Creech pitched the final two innings, giving up two runs on three hits, walking none and striking out one.
The JD defense had only one error.
The Wayne County game was a nail-biter. After Wayne scored two runs in the top of the first but the Jackets exploded for seven runs in the bottom of the inning.
Taylor walked and went to second on Miles’ sacrifice bunt. Marchant followed with a double to plate Taylor. Chaney then singled to score courtesy runner Hulett to tie the score 2-2. After Taylor was forced out at second, Leggett doubled, Kirby, Lewis and Walters got consecutive singles to make it 5-2 with the bases loaded. Taylor then walked in a run to make it 6-2. Miles then got his second sacrifice of the inning with a fly to center to make it 7-2.
After Wayne got three runs in the second to close to within 7-5, JD got one of the runs back on a towering solo homer over the left field fence by Metts to make it 8-5.
That score stood until the fifth when each team got a single run to make it 9-6. Jeff Davis’ run came on back-to-back doubles by Kirby and Lewis.
In the seventh, things got tense. After a single and an error put two Wayne batters on base, a double to left scored both runs to make it 9-8 with a runner at second and no outs.
Marchant erased the runner at second when he strayed too far from the bag and Marchant threw him out from his catcher’s position. After an error, a single and a walk to load the bases Walters fielded a grounder at third and stepped on the bag to end the game.
Half of Jeff Davis’ 10 hits were doubles, two by Marchant who drove in one run. Lewis had a double, a single and two RBI, Kirby had a double, a single and one RBI, Metts homered, Leggett doubled, Chaney singled and drove in a run, and Walters singled.
Metts was the winning pitcher. He went three innings, giving up five runs on five hits, walking four and striking out one. Baucom pitched two innings, giving up one run on two hits, walking one, hitting one and striking out one. Taylor pitched one inning, giving up one run on two hits, walking one and striking out one. Creech pitched the final inning, giving up an unearned run on two hits, walking one and striking out none.
Score by innings:
JDHS 0 0 6 2 2 -10
ACHS 0 0 0 0 0 – 0