Tia Cornish at the charity stripe 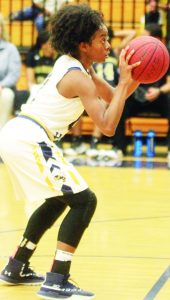 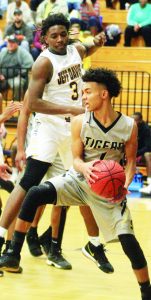 Doston Bailey can’t get this rebound 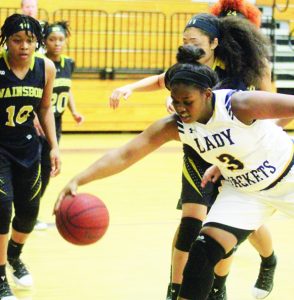 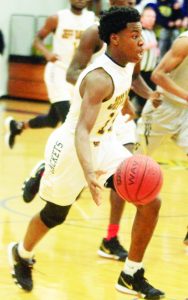 CJ Parker drives to the goal

Jeff Davis High’s boys took an exciting 73-71 victory over visiting Swainsboro Friday night, using a flurry of 3-pt. shots to overcome a 10-point halftime deficit.
The Lady Jackets got an exciting win over St. Vincent’s Academy Monday night in Savannah, squeezing by the Saints 53-50 in overtime.
In other games, both teams lost last Tuesday to Vidalia in Vidalia, the girls falling 37-32 and the boys losing 54-48.
Friday night the Lady Jackets fell to Swainsboro 48-27.
In Vidalia, Coach Nikki Perry’s charges were out-scored 12-2 in the second quarter and that turned out to be the difference in the game.
JD had a balanced scoring attack led by Keke McDuffie with nine. Tia Cornish had eight, Jakhia Green seven, all in the third quarter, Jazmine Johnson added six and Tania Hall rounded out the scoring with two.
T. Roundtree topped Vidalia with 15.
In the boys tilt, Coach Bo Boatright’s Jackets led 14-10 at the first stop but, like in the girls game, the second quarter proved to be crucial. The Indians outscored the Jackets 16-9 in the quarter and led 26-23 at intermission.
Ja’Queze Kirby led the Jacket scoring with 15 and Ti King joined him in double digits with 10. James Johnson had eight, Bran Swain seven, C.J. Parker four, and Nyjai Gillis and Dotson Bailey two each.
Vidalia had three in double figures. Anthony Murphy had 16 and Antrell Williams and Anthony Jones 12 apiece.
Friday against Swainsboro, the 19-3 Lady Tigers simply had too much talent for the young Lady Jackets to handle, leading 37-16 entering the fourth quarter and winning by the same margin.
Johnson topped the Jeff Davis scoring with seven, McDuffie and Dee Wooten had five each, Cornish four, Hall two and Green and Morgan Yearty one each.
D. Brown led Swainsboro with 16 and Charlsey Kelly had 14.
Things started out badly for the Yellow Jacket boys as Swainsboro methodically worked their way to a 34-24 halftime lead. But in the third quarter, Parker hit a trio of 3-pt. shots and Kirby added two more as the Jackets pulled within 48-47 going into the fourth quarter.
Kirby and Parker both got 3-pt. shots in the fourth quarter and Kirby came to life to build Jeff Davis’ lead to as many as seven before the Tigers rallied too little, too late.
T.J. McMillian came off the bench for his best outing of the season and was a key to the second half surge.
Kirby was the game’s top scorer with 26, including five shots from beyond the arc. Parker had his best night of the year with 18 points and four 3-pt. shots. Gillis and Bailey had eight each, King five, Jaylen Grady four, and Swain and McMillian one each.
Jamil Watkins and A.J. Kingsberry had 16 each for Swainsboro backing up Cedrick Searbrough’s 21.
On Jan. 17 when St. Vincent’s Academy visited Hazlehurst, the Lady Jackets cruised to a 44-27 victory. But Monday in Savannah, things were much different.
The Saints shocked the Lady Jackets by taking a 25-19 halftime lead. In the third quarter, JD used a trio of 3-pt. shots to out-score St. Vincent’s 18-10 and take a 37-35 lead. But the Saints fought back to tie the score 47-47 at the end of regulation.
In overtime, Green hit two of four free throws, McDuffie hit a field goal and Yearty scored her only bucket of the night to spark JD to the 53-50 win.
McDuffie topped Jeff Davis with 16 points and Green and Johnson had 10 apiece. Jasmine McNeely added five, Bryce Williams and Cornish three each, and Wooten, Hall and Yearty two apiece.
The Lady Jackets hit a season high six 3-pt. shots, two each by Green and McDuffie, and one each by Williams and McNeely.
Sophie Winters topped St. Vincent’s with 14 and E. Cowart had 12.