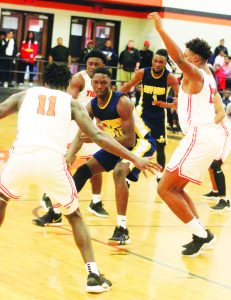 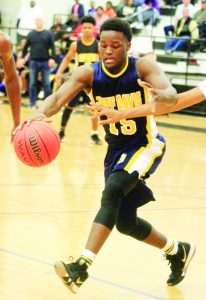 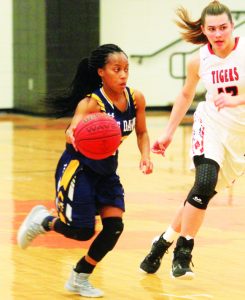 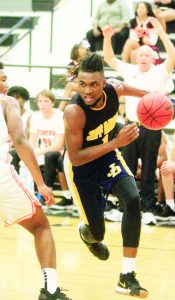 Jeff Davis High’s twin basketball losses in Metter Friday night were crucial to both the boys and girls teams’ runs to get the No. 4 spot in the Region 2-AA standings.
Coach Nicki Perry’s girls had defeated Metter earlier in the season in Hazlehurst by a score of 47-39. But Friday night the Lady Tigers took an upset win 44-40.
Coach Bo Boatright’s boys’ loss was particularly painful. Having bested the Tigers 78-71 in Hazlehurst, Metter manhandled the Jackets Friday by a score of 75-58. The two teams are tied for fourth in the region with 6-4 records. And the Jackets still must play Vidalia (last night, Tuesday) in Vidalia and have Swainsboro and undefeated Woodville-Tompkins left to play in Hazlehurst.
Last week’s action began last Tuesday with a pair of wins over Toombs County. The girls won 42-30 behind 14 points from Keke McDuffie, while the boys rode a 36-pt. performance by Ja’Queze Kirby.
The Toombs boys put a scare in the Jackets by jumping out to an 18-9 lead at the first stop. But in the second quarter Kirby hit a pair of 3-pointers and tallied 14 points in the stanza as Jeff Davis led 34-25 at intermission.
For the girls, behind McDuffie were Morgan Yearty and Fefe green with six each, Jakhia Green and Dee Wooten with five apiece, Jazmin Johnson with four and Jekia Smith with two.
KK Mobley topped Toombs with 13.
Behind Kirby’s 36 points were Ti King and James Johnson with seven each, Nyjai Gillis and Dotson Bailey six apiece, C.J. Parker five, and Bran Swain and Emanuel Rumph two each.
Last Thursday, the Lady Jackets hosted Saint Vincent’s Academy and broke out of a 20-20 halftime tie to pull away to a 44-27 victory.
McDuffie again led the scoring with 12 points. Tia Cornish had eight, Fefe Green 7, Wooten six, Johnson four, and Yearty and Jakhia Green two each.
Sheridan Lynch led St. Vincent’s with 13.
In Metter, JD led 20-17 at intermission but fell apart in the third quarter as the Lady Tigers took a 14-4 advantage in the quarter to take a 31-24 lead, and then held on for the 44-40 victory.
Wooten led the scoring with nine, Fefe Green had eight, McDuffie seven, Jakhia Green six, Cornish and Yearty four each, and Johnson two. S. Johnson had 21 and T. Walker 13 for Metter.
In the boys game, Metter jumped out to a big first quarter lead before Kirby buried a trio of 3-pt. shots and a shorter shot to score 11 in the quarter and get the Jackets back to within three at 17-14 at the first buzzer.
But Metter took a 20-7 second quarter advantage as Boatright’s younger players lost their patience and took a bevy of rushed and forced shots, to the Tigers’ advantage.
Leading 37-21 at intermission, the Tigers matched the Jackets shots in the second half to win by 15.
Kirby topped the Jackers with 23 points and Gillis joined him in double digits with 12. Parker had six, Bailey five, Johnson four, Swain and King three each, and Jeremiah Reed two.
K. Williams and I, Hackett had 24 and 22 for Metter.
Score by quarters:
Girls
TCHS 8 6 9 7 -30
JDHS 10 9 13 10 -42