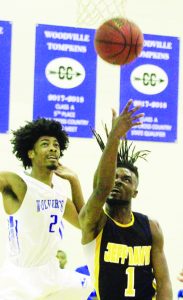 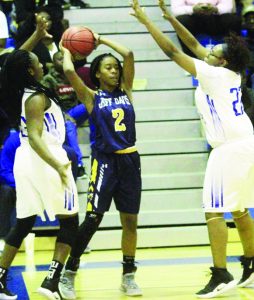 Jeff Davis High’s basketball teams split a pair of games last week, both teams defeating Bacon County Tuesday in Alma and both falling to Woodville-Tompkins Friday in Savannah.
Coach Niki Perry’s girls snapped a 6-game losing streak with their 40-29 win over Bacon, thanks to some clutch free throw shooting down the stretch by junior guard Jakhia Green.
Green led all scorers with 15 points and hit her last 10 free throws in the fourth quarter. For the game she made good on 13 of 16 charity tosses.
Keke McDuffie and Jazmine Johnson chipped in six points apiece, Fefe Green and Dee Wooten had four each, Morgan Yearty three and Tia Cornish two.
S. Barnes topped Bacon with 10 points.
In the boys game, Bacon led 18-15 at the first stop but over the next two quarters Ja’Queze Kirby, Dotson Bailey, Ti King and C.J. Parker sparked a 39-17 run to put the game out of the Raiders’ reach. JD eventually won 68-51.
The first quarter was a long range contest as Kirby and Parker both hit a pair of 3-pt. shots and Bacon’s Lamarcus Pruitt buried three shots from beyond the arc.
Kirby led four Jackets in double figures with 27 points. Parker had 12, King 11 and Bailey 10. James Johnson added four and Bran Swain and Jaylen Grady had two each.
Pruitt finished with 20 for Bacon and Nick Snell had 10.
In Savannah Friday, the W-T girls rattled off a 20-2 first quarter advantage and led at halftime 27-14. They pulled away in the second half to a 60-31 lead.
Fefe Green led Jeff Davis with seven points, Wooten had six, Johnson five, McDuffie and Yearty four each, Jakhia Green three and Bryce Williams two.
Janiah Castle and Jasmin Grayson topped Woodville-Tompkins with 14 and 13.
Woodville-Tompkins’ boys got off to a slow start as Jeff Davis jumped out to an early lead in the first quarter. But then the Wolverines showed why they were undefeated and ranked No. 1 in the state among Class AA teams as they steadily pulled away to a 67-42 win.
Kirby was the only Jacket in double figures with 15. Parker, King and Bailey had six each, Nyjai Gillis four, Jeremiah Reed three and James Johnson two.
W-T’s Preston Crisp led all scorers with 25 points after going scoreless in the opening quarter. Bernard Pelate backed him up with 17.
The games left the JD girls with a 3-5 region record and 6-11 overall, while the boys are 5-3 and 13-6.
Score by quarters:
Girls
JDHS 5 9 8 18 -40
BCHS 6 5 4 14 -29