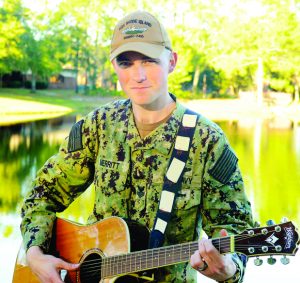 Machinist’s Mate (Nuclear) 1st Class Hunnter Merritt poses for a photo on Naval Submarine Base Kings Bay. A native of Denton, Georgia, Merritt, stationed aboard USS Rhode Island (Blue) (SSBN 740), is a singer/songwriter with a passion for music when he is not preparing for upcoming deployments and tactical exercises at sea. Rhode Island is one of five ballistic-missile submarines stationed at Naval Submarine Base Kings Bay, Ga. (U.S. Navy photo illustration by Mass Communication Specialist 2nd Class Bryan Tomforde) (This image was created using cloning techniques)

By Petty Officer 2nd Class Bryan Tomforde
A Jeff Davis High School 2008 graduate and native of Denton is serving the U.S. Navy as part of a crew working aboard one of the world’s most advanced ballistic-missile submarines.
Navy Petty Officer 1st Class Hunter Merritt joined the Navy in 2009 and is a machinist’s mate (nuclear) aboard the Ohio-class ballistic-missile submarine USS Rhode Island.
A nuclear machinist’s mate operates and maintains the submarine’s nuclear propulsion plant and equipment. Measuring 560 feet long, 42 feet wide and weighing more than 16,500 tons, a nuclear-powered propulsion system helps push the ship through the water at more than 20 knots.
“I am an intense mechanic who can fix anything and everything aboard a submarine,” said Merritt, who works in the auxiliary division aboard the submarine.
The Navy’s ballistic-missile submarine, often referred to as “boomers,” serve as a strategic deterrent by providing an undetectable platform for submarine-launched ballistic missiles. They are designed specifically for stealth, extended patrols and precise delivery of missiles if directed by the President. The Ohio-class design allows the submarines to operate for 15 or more years between major overhauls. On average, the submarines spend 77 days at sea followed by 35 days in-port for maintenance.
Merritt is part of the boat’s blue crew, one of two rotating crews, which allow the boat to be deployed on missions more often without taxing one crew too much. A typical crew on this submarine is about 150 officers and enlisted Sailors.
Merritt expressed how important teamwork and strong leadership is for everyone on the boat in accomplishing the mission.
“I am a work center supervisor and help with the achievements of my shipmates, as well as a quality assurance planner and assistant lead petty officer,” he said. “I am passionate about my job. How successful we are, is dependent upon every Sailor’s contribution to what we do.”
Submariners are some of the most highly-trained and skilled Sailors in the Navy. The training programs are highly technical to ensure each crew has to be able to operate, maintain and repair every system or piece of equipment on board.
Regardless of their specialty, every submariner also has to learn how every system on the submarine works and how to respond in emergencies. To become qualified in submarines is challenging, however earns the Sailor the right to wear the coveted “dolphins” on their uniform and life-long respect among colleagues and veterans.
With such a small crew, submarine Sailors build strong fellowship, are highly motivated and quickly adapt to changing conditions. A career as in submarines is a life of specialized work, unique missions and some of the most advanced training in the Navy.
“I love being underway,” he said. “It very peaceful and quiet. The camaraderie submariners have is very different to any other community.”
Aside from his time as a Rhode Island crew member, Merritt is a passionate singer-songwriter with expertise in playing guitar, ukulele and drums.
“Every song I write means more to me than the last,” he said. “I love the Navy and I really love life. If I can help someone else feel that way about life so that they can touch others in that same way, then that is success.”
Merritt was raised by his grandparents and his grandfather was a musician.
His motivation to write and sing comes from his personal experiences and says his first love, his wife, is the spark that keeps him passionate. He also writes of travel with the Navy and near-loss of loved ones, including recently losing his grandfather.
“My passion for being has become my life-movement,” he added. “Many people I meet are so complicated and struggling and I believe it is very important, no matter who we are, to try our best and live our lives the best we can.”
Merritt plans to keep writing music and has played in public several times, including in Norfolk, Va., and Groton, Conn., before packed shows.
He also plans to achieve his military goal of making chief petty officer and one day retire from the Navy.
Rhode Island, homeported at Naval Submarine Base Kings Bay, is the third U.S. Navy vessel to be named after the state. Rhode Island was commissioned July 9, 1994, and is one of five Ohio-class ballistic-missile submarines stationed at the base.