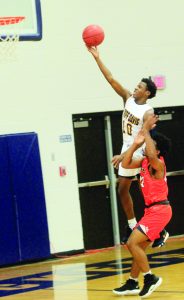 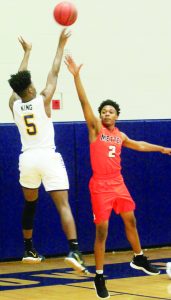 Jeff Davis High’s boys won a pair of Region 2-AA games last week, rolling over Toombs County 85-59 Tuesday in Lyons and getting a big win over ranked Metter Friday in Hazlehurst 78-70. Saturday, the Jackets traveled to the Atlanta Area and played well against a strong team from South Paulding in a boys showcase, falling by a score of 75-71.
Junior Ja’Quez Kirby dominated Metter, scoring 26 points, and Friday night he had lots of scoring help as four Jackets hit in double figures.
In Lyons, Kirby got 17 of his 26 points after intermission. Jeff Davis led only 31-28 at intermission but they put 29 points on the scoreboard in the third period to add 20 points to their lead. Their 54 second half points turned the game into a rout.
Sophomore Ti King with 13 points was the only other Jacket in double figures. Freshmen Bran Swain and C.J. Parker had nine each, Jaylen Grady seven, Doston Bailey six, Nyjai Gillis four, James Johnson, T.J. McMillian and Emanuel Rumph three each, and Jeremiah Reed two.
In the Metter game, the Jackets had a strong first quarter, outscoring the Tigers 22-14 for an eight point lead. That turned out to be the margin of victory as the two teams matched points over the last three quarters.
Kirby’s 20 points topped JD’s scoring as King had 17, Parker 13 and Johnson 10 to give the Jackets four players in double figures. Swain added seven, Rumph five, McMillian two and Gillis two
The Tigers’ I. Hackett topped all scorers with 22, and K. Williams and E. Royal chipped in 11 apiece.
Saturday night, the Jackets outscored South Paulding 60-46 from the floor. But South Paulding shot 45 free throws, making 29, while the Jackets shot only 19 free throws, making 11. That proved to be the difference in the game.
Kirby picked up three fouls in the first half, scoring only eight points. Swain took up the slack, scoring 10 points in the second quarter and JD led 33-32 at intermission. Jeff Davis led 54-52 entering the final quarter but Paulding hit 17-of-24 free throws in the final quarter to outscore JD 23-17 during the period to pull out the 75-71 win.
Kirby scored 20 points after halftime and led all scorers with 28 points. Swain and Johnson had 12 and 10 respectively, King eight, Parker and Reed five each, Gillis three and Bailey two.
Score by quarters:
JDHS 19 12 29 25 -85
TCHS 10 18 9 22 -59