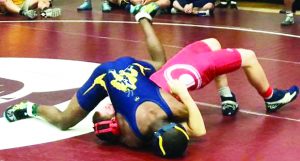 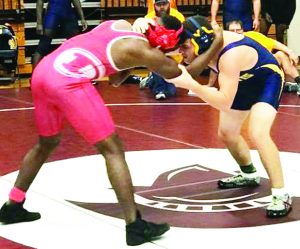 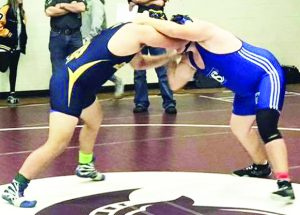 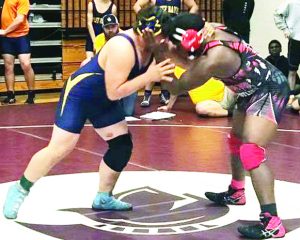 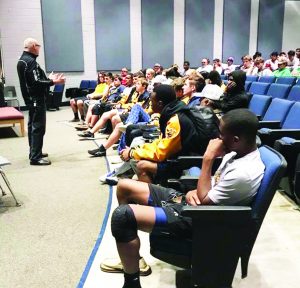 Bill Gifford of Fellowship of Christian Athletes speaks to wrestlers

This past weekend the Jeff Davis High School wrestling team hosted the 12th annual Yellow Jacket Duals, the largest tournament ever. Twenty-six teams were represented as far north as Loganville (near Athens), as far south as Berrien County, as far east as Islands High School (Savannah), as far west as Turner County, and even another state with Lexington, S.C.
The tournament started Friday at 4 p.m. and finished Saturday at 4 p.m. Eight teams spent the night either in Jeff Davis or surrounding counties while others traveled back and forth.
There were 117 team matches at the varsity tournament on the weekend and almost 2,000 individual matches overall for the two days of wrestling. Saturday the school also hosted the 4th Annual JV Stinger Slam, 12 teams competed this year making it the biggest one yet. Again, this year 10 mats were used utilizing the new gym on the high school campus.
Approximately 800 fans, approximately 700 team members, and 15 officials were in Jeff Davis County for over 24 hours. Teams and fans were amazed by the facilities and support.
The winner of the tournament was Ware County, the Yellow Jackets finished 9th, and had teams competing in both the varsity and in the JV tournament.
Saturday morning an FCA Wrestling Devotion was held with the head of Georgia FCA Wrestling Bill Gifford giving the message. Tere were 150 wrestlers, coaches, mat girls, and spectators to attend.
“We would like to thank everyone for the support and help this past weekend to make this year a success,” said wrestling coach Chris Davis.