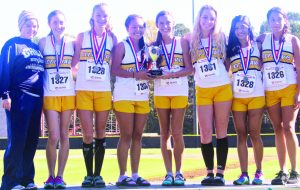 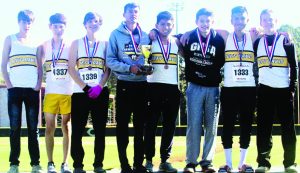 The Jeff Davis cross country teams had business on their mind as they competed at the GHSA Cross Country State Championship hosted by Carrollton High School Nov. 2-3. The 2 day championship event started on Friday with boys and girls races from the 5A, 6A, and 1A Private classes. The remainder of the classification races were held on Saturday.
On Friday schools battled cool temps, rainy weather, and a damp course from the storms that went through on Thursday and early Friday morning. Although the conditions were not the best the times were some of the best over the last several years.
In the 6A races the Pope High boys took the title while Cambridge High won the girls title. In the 5A Starrs Mill boys and Woodland girls took the titles. And in 1A Private, Wesleyan boys and Atlanta International School girls took the titles. As the weather cleared Friday afternoon the temperatures began to drop and the wind picked up. Those conditions throughout Friday night into Saturday morning helped improve the course conditions.
Saturday morning provided to be a little cold for the early races but the conditions throughout the day improved to provide some of the best conditions the state meet has seen in recent years.
In the first races of Saturday the largest classification in the GHSA took to the course first with South Forsyth winning the boys race and Marietta winning the girls race for the 7A titles. Next up was the 2A classification with Union County boys and Bleckley County girls taking the titles. Westminster took both titles in the next races in the 3A classification. Following the 3A races were the 4A races with St. Pius boys and Marist girls taking the titles. The 1A Public classification ran the final two races with Georgia Military College Prep boys and the Telfair County girls winning those titles.
In the 2A Championship race the Yellow Jackets came in projected as the number five team in the boys race. The Yellow Jacket squad ran a very strategic race as they raced the first part of the course very conservatively before making their move to make the podium for the very first time. Their strategy paid off as they surged late in the race to move up several spots to claim the last podium spot as the number four team.
Joshua Ratliff led the Jacket squad with a ninth place finish (18:08.93) and the first Yellow Jacket boy to pick up All-State Honors. Hector Huerta (16th, 18:32.40), Logan Tucker (17th, 18:38.29), Ulices Gonzalez (40th, 19:17.96), and Mario Aguirre (52th, 19:32.58) rounded out the scorers that placed the team on the podium as they slipped by the state favorite Bleckley County by one point as they raced without their number one runner who was out with an injury.
On the girls side the Lady Jackets were projected third coming into the title race. The Lady Jackets used a similar strategy as the boys as they were conservative the first half of the race before surging the last half of the race. That strategy also worked well as they gained 24 places in the last half of the race to move ahead of Armuchee and Banks.
Zoie Marchant led the Lady Jackets with a fifth place finish (21:33.19) and the first Lady Jacket to gain All-State Honors. Riley Walters (12th, 22:31.22), Chiana Cruz (18th, 22:46.06), Kenya Rodriquez (24th, 23:06.40), and Kalli Wilkes (31st, 23:29.20) capped the girls scoring as they finished as the Class AA State Runner-Ups behind Bleckley County who has won three straight titles.
The best finish for the boys in the first three years of the program was 6th in 2017, while the girls best finish was 5th in 2016.
The coaching staff was proud of how both teams handled the race and the strategy they asked them to run. The staff also thanks the administration, parents, family, and cross country alumni who came to support the Yellow Jacket squads as they had one of the largest fan bases in AA and that support went a long way to help the teams to their awesome finishes.