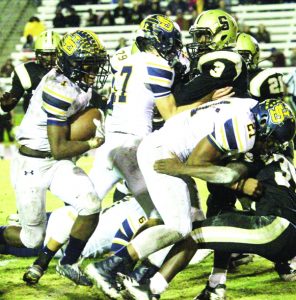 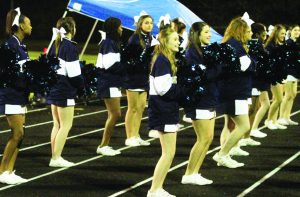 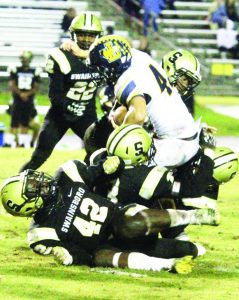 Swainsboro High School clinched the 2018 Region 2-AA title Friday night in Swainsboro as they took a hard-fought, 14-0 win over Jeff Davis High.
The Jackets fell to 6-3 with the loss and 2-3 in the region while Swainsboro improved to
7-2 and 5-0.
With the final week of regular season play this Friday night, Swainsboro and Vidalia (8-1, 4-1) have clinched the No. 1 and No. 2 playoff seeds from the region. Toombs County is 3-2 and Jeff Davis, Metter and Bacon County tied at 2-3.
Toombs hosts Swainsboro this week, Jeff Davis hosts Metter and Bacon hosts Vidalia. The Yellow Jackets can get either the No. 3 or No. 4 playoff spot if they defeat Metter, depending on how the other two games come out.
Friday’s game in Swainsboro was an old-fashioned slugfest as both defenses gave up yardage grudgingly. Yellow flags marred much of the evening for both teams.
The Jackets began their first possession at their own 20 and quickly moved to midfield, mostly on a 15-yd. Emanuel Rumph run, before a series of penalties pushed the ball back to the 40 and, on 4th-and-15 the Jackets punted the ball away.
The next time the Jackets punted, the kick was blocked to set up Swainsboro’s first score. They scored on the first play on a 46-yd. pass over the middle to go up 6-0. The P.A.T. kick made it 7-0.
After the kickoff, Rumph had another 15-yd. run to moved the ball into Tiger territory at the 43. But, again, a penalty flag flew and the Jackets couldn’t moved the chains. Cade Walters punted the ball away to the Swainsboro 20 early in the second quarter.
The Tigers moved the ball to their own 47 where the JD defense stiffened. After Cody Ewing and Doston Bailey stopped a runner for a 1-yd. gain, Gerardo Villareal dropped a runner at the line of scrimmage. Then Villareal pressured the Tiger quarterback out of the pocket, causing an incomplete pass, and Swainsboro had to punt the ball away.
Taking over at their own 16, the Jackets carved out a 16-play drive to inside the Swainsboro 20 before an interception halted the march. The drive ate up almost all of the second quarter clock.
Big plays in the drive were a 15-yd. penalty against the Tigers, a 16-yd. run by Austin Wood, and a 16-yd. run by Rumph. But most of the yardage was picked up on short runs as the offensive line opened gaps in the Tiger defense to get short yardage gains.
The interception came on a halfback pass that was picked off in the end zone and returned 101 yards for an apparent score. But a penalty nullified the score and the Tigers started at their own 31.
Swainsboro had time for only one play as intermission came with the Tigers on top 7-0.
The third quarter consisted of a series of ball control offense as Swainsboro started with a 9-play drive before turning the ball over on downs, the Jackets putting together a 10-play drive before punting the ball away, and then the Tigers fashioning a 15-play drive for the final touchdown of the game.
Swainsboro’s first drive was foiled by a 15-yd. penalty and ended on an errant 4th-down pass from the Jeff Davis 24.
JD then marched from their 24 to the Swainsboro 41, mostly on 10- and 12-yd. runs by Rumph. But a pair of penalties backed them up and a 3rd-and-10 pass from Britt Metts to Walters only got 7 yards and Walters had to punt the ball away.
Swainsboro started their scoring drive on their own 33. They overcame three penalties on the march which consisted of a mixture of runs and passes. The first four plays of the drive ate up the remainder of the third quarter and the final 12 chewed up most of the fourth quarter clock. They scored on a 4-yd. pass.
The Jackets had a 3-and-out after the ensuing kickoff. Swainsboro then ran 10 plays to run out the final time on the clock.
Score by quarters:
JDHS 0 0 0 0 – 0
SHS 7 0 0 7 -14