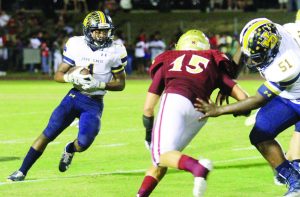 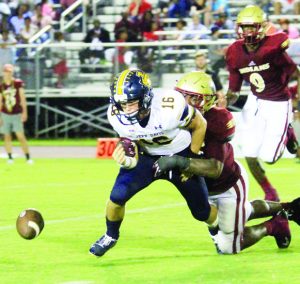 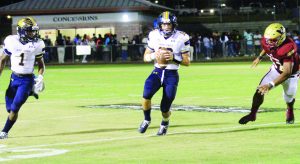 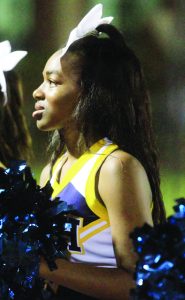 Friday night in Vidalia, the undefeated Vidalia Indians used big plays and a flurry of flags against Jeff Davis to take a 43-15 victory.
The win improved Vidalia’s record to 6-0 as the Jackets go into a bye week with a 5-2 record. Vidalia is 2-0 in Region 2-AA and Jeff Davis fell to 1-2.
The game got off to a bad start for the Jackets as, on the first play from scrimmage, a Vidalia runner got outside and, with the help of a illegal block in the back, raced 80 yards all the way the Jacket 3. The Indians scored on the next play to go up 6-0. On the 2-pt. P.A.T. attempt, Emanuel Rumph came up with a monster hit just short of the goal line to thwart the try.
On the Jackets’ first possession, they tried a little razzle-dazzle as quarterback Britt Metts threw in the flats to wide receiver Cade Walters who promptly threw the ball back across field to Metts who picked up 11 yards. But the play came after a 10-yd. penalty and another 10-yd. walk-off kept the Jackets from moving the chains.
Moments later, Bradley Owens pounced on an Indian fumble at the Vidalia 25. But before the Jackets could get a play off the officials flagged the Jackets for the third time in the quarter, this time for 5 yds. Metts got 14 on a keeper two plays later and the Jackets moved the ball inside the 15. But the drive stalled and Rici Rubio came on to try a 30-yd. field goal but his kick was blocked.
At the end of the first quarter, the score was still 6-0 Vidalia.
On their next possession the Jackets marched 50 yards in nine plays to get on the scoreboard.
After a run lost 2 yds., Metts connected with Nyjai Gillis for 18 yards down to the Vidalia 33. After Rumph got four, Austin Wood darted through a huge hole for 19 yards down to the 11. Then the officials got into the act again with a 10-yd. walk-off moving the ball back to the 21. Austin Wood then used some nifty running to break free for 13 yards to the eight. Jashaun Kirby then ran 5 yds. to the three and the Jackets faced 3rd-and-2 at the three. On the next play, Metts threw to Austin Wood in the right corner of the end zone for the score. On the P.A.T. attempt, Walters took the ball in for two points and Jeff Davis was up 8-6.
Vidalia came right back, going 64 yards in seven plays, overcoming two penalties. They scored on a 31-yd. run and successfully went for two to go up 14-8.
While there was no more scoring in the first half, the Jackets did have one outstanding play, a pinpoint pass from Metts to Rumph with Rumph making a leaping catch between two defenders for a 16-yd. pickup.
The Jackets took the second half kickoff and picked up a couple of first downs. But 5-yd. and 10-yd. penalties thwarted the effort and Walters had to punt the ball away.
It took the Indians only three plays to get on the board again. After a 25-yd. run, the Indians ran for 10 and 10 yds. were tacked on for defensive blocking below the waist. On the next play they scored from 15 yards out. On the successful 2-pt. conversion run, the Jackets were again flagged for defensive blocking below the waist which drew a protest and another flag for a 15-yd. unsportsmanlike conduct.
With 25 yards in penalties stepped off for the ensuing kickoff, Vidalia kicked from the JD 30 with a 22-8 lead. The Indian onside kick was recovered at the 15 and in the battle for the football, the officials threw yet another flag against the Jackets moving the ball to the eight. Vidalia scored on the next play and the P.A.T. kick made it 29-8.
Following the kickoff, Rumph ran for 6 and Metts hit Walters for 16 more. But two plays later, the Indians recovered a fumble at the Jeff Davis 45.
The JD defense stopped the Indians and took over at the 31 from where the Jackets put together a promising drive.
Rumph started the drive with an 18-yd. run which was nullified by another flag against the Jackets. Metts then connected with Wood for 17-yds. and a first down. Rumph got two as the third quarter came to an end, and then Wood got 6 and 5 for a first down at the Indian 39. After Wood got one, Metts passed to Gillis for seven more and then Kirby picked up the first down with a 5-yd. run to the 25. But that was as far as the drive would get as, three plays later, the Indians intercepted a pass at their own 13.
Then the Indians broke the Jackets’ back with runs of 30 and 57 yards and a 36-8 lead.
But Jeff Davis didn’t quit. They responded with a 64-yd. scoring drive. Wood started things with an 11-yd. run then Kirby picked up 15 more up the middle.
After a 5-yd. penalty against JD, Metts hit Wood for 18 down to the Vidalia 21. Kirby then ran for 19 to the 2, then covered the final distance in two dive plays. Rubio booted the conversion to make it 36-15.
After the unsuccessful onside kick, Vidalia used a 57-yd. run to make the final score 43-15.
The Jackets then put together an 8-play, 60-yd. drive but ran out of time on the clock.
The Jeff Davis offense picked up 210 yards rushing and 97 passing for 307 total yards. Kirby carried 19 times for 105 yards and a touchdown. Austin Wood had 14 carries for 75 yards and caught four passes for another 43 yards and a touchdown.
Metts was good on 10-of-12 passes for 86 yards and a touchdown.
The JD defense gave up 377 yards rushing with 280 of those yards coming on six runs of 25 yards or more. The Indians picked up another 13 yards through the air for a total of 390 yards.
Bradley Owens had a fumble recovery and Cody Ewing led the tackling with four stops.
Score by quarters:
JDHS 0 8 0 7 -15
VHS 6 8 15 14 -43