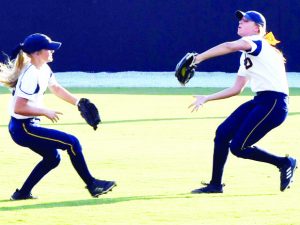 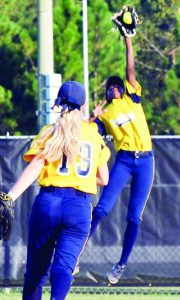 Jeff Davis finished the regular season with a 17-9 record, 12-2 in Region 2-AA.
In the Lady Jackets’ other game last week, they fell to Pierce County 5-1 in a non-region game in Blackshear.
The Vidalia game was the most important of the season for Jeff Davis. Going into the game, Vidalia had only one region loss, to the Lady Jackets. A Lady Indian victory would give them the No. 1 region playoff seed and drop the Lady Jackets to the No. 3 seed behind Bacon County.
With the win, Jeff Davis, Vidalia and Bacon County finished tied for the top spot with 12-2 records and the Lady Jackets got the top seed through the tie-breaker rules (See story elsewhere).
The loss to Pierce was the second of the year to the Lady Bears who are 15-8 overall and 8-1 in Region 2-AAA.
After 2 1/2 scoreless innings, Pierce had a 4-run third and never trailed.
Jeff Davis’ run came in the fifth inning when FeFe Green doubled to left and Paige Carter followed with another double to left to score Green.
Carter led the JD offense with a double and a single and an RBI. Dee Wooten had two singles, Green singled and Lanie Scott singled.
Caroline Waters took the loss on the mound. She went 2 1/3 innings, giving up three runs on three hits, walking one, hitting two and striking out none. Lindsey White pitched 2 1/3 innings, giving up one run on two hits, walking none and striking out none. Carter pitched 1 1/3 innings, giving up one earned run on four hits, walking none and striking out none.
In Tuesday’s game in Vidalia, the Lady Jackets led the game until Vidalia scored a single run in the bottom of the sixth to tie the score 4-4.
In the top of the seventh, Carter singled followed by a Karli Williams bunt. The throw to first was wild and Carter moved to third and Williams to second, bringing Dee Wooten to the plate. The Lady Indians issued an intentional walk to Wooten to load the bases. Marlee Colson then followed with a deep sacrifice fly to send Carter across the plate with the winning run.
In the bottom of the inning, Lindsey Scott retired three Vidalia batters in a row to take the win.
Williams had a pair of singles and two RBI, Carter singled twice, Wooten and Scott both had a single, and Colson had a sacrifice and drove in three runs.
In Blackshear, Pierce had a 4-run third and in Hazlehurst Thursday, the Jackets had a 4-run third.
The story of the game was Scott’s pitching as she blanked Swainsboro on two hits, walked no one and struck out eight. White pitched the final inning, retiring all three batters she faced, one by strikeout.
Waters had her season’s best day at the plate with a pair of triples and a walk in three trips to the plate.
Scott had a single and double, Karli Williams singled twice, Carter had a single, a sacrifice and an RBI, Wooten and Marlee Colson both drove in two runs with a single, and Amillian Clements had a sacrifice and an RBI.
Carter and Green each had a stolen base.
Telfair County is 15-6 overall and 12-0 in Region 2A. Their six losses have all come to higher classification teams, including a 5-4 loss to Jeff Davis earlier in the season.
But Monday they used a 13-hit attack and strong pitching to take their 11-1 victory.
The Lady Jackets had only five hits, a pair of singles by Carter, and singles by Clements, Colson and Karlie Watson. Wooten drove in Carter for JD’s only run.
White started on the mound and took the loss. She went two innings, giving up two earned runs on five hits, walking none and striking out one. Waters pitched two innings, giving up three runs on three hits, a walk and a strikeout. Scott threw three innings, giving up four runs on five hits, walking one and striking out none.
Score by innings:
JDHS 2 0 2 0 0 0 1 -5
Vidalia 2 0 0 1 0 1 0 -4