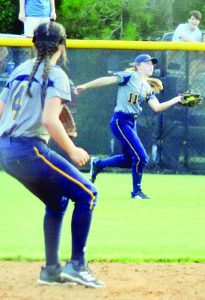 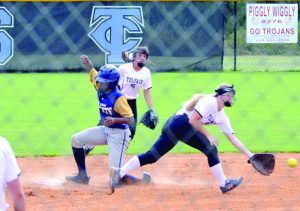 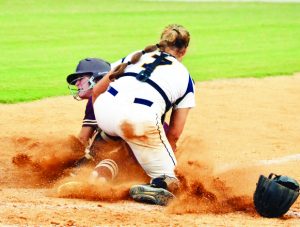 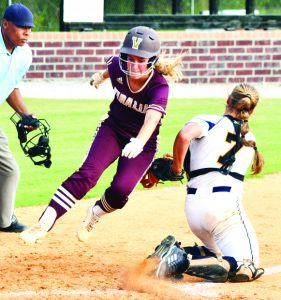 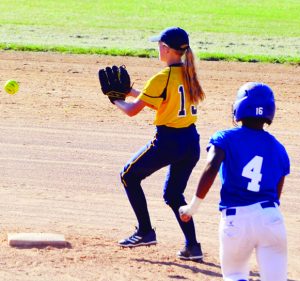 Jeff Davis High’s softball team has turned around a lackluster 2-3 start into a 6-3 record with a 4-game win streak last week.
They started the streak Tuesday with 17-0 and 13-0 spankings of St. Vincent’s Academy in a Savannah doubleheader. Wednesday, they defeated Telfair 5-3 to improve to 5-3 and Thursday topped Vidalia 6-3 to improve to 6-3.
The St. Vincent’s and Vidalia games were Region 2-AA contests as the Lady Jackets improved to 4-1 in the league. Vidalia came into the contest with a 7-1 overall record and a 4-0 region mark, having handed region-leading Bacon County (5-1) its only region loss.
In the 17-0 win over St. Vincents, JD had 12 hits, collected six walks, and another batter reached after being hit by a pitch. So the bases were loaded with Jackets throughout the three innings it took to put away the Saints.
FeFe Green led the hit parade, going 3-for-3 with two singles, a homer and a whopping seven RBI. Paige Carter was 3-for-3 and was the Lady Jacket hit batter. Karli Williams homered and singled and drove in four runs. Georgia Roberts tripled in a run, Karlie Watson had a single and an RBI, and Jakhia Green and Lanie Scott both singled.
Scott pitched a no-hitter and allowed only two baserunners, with a walk and a hit batter. She struck out five.
The JD defense played without an error.
In the 13-0 win over the Saints, the Lady Jacket jayvees took the field against the out-manned ladies from St. Vincent’s. While the pace was a bit slower in the first two innings, the Lady Jackets struck for 10 runs in the third inning, turning a 3-0 lead into a 13-0 advantage.
Marlee Colson had a single, a double, a homerun and six RBI to lead the offense. Alison Herrington singled, doubled, tripled and drove in two runs. Lillie Hughes doubled and had two RBI, Lindsey White singled in a run, and Serenity Carter, and Amillian Clements both singled.
On the mound, it was White’s turn to pitch a no-hitter as she faced the minimum number of batters, allowing only one baserunner on a walk. She struck out three.
Karlie Watson stole a base and, again, the Lady Jacket defense played without an error.
Playing in McRae Wednesday, the Lady Jackets faced a strong Class A team that made it to the Sweet 16 last season.
Jeff Davis jumped on top quickly with four runs in the top of the first inning. The Trojans responded with a single run in the bottom of the first and the game went scoreless until JD tallied once in the fifth. In their last at bat, the Lady Trojans faced a 5-1 deficit and they scored twice to make the final score 5-3.
Carter and FeFe Green again led the offense with a pair of singles apiece. FeFe Green drove in one run. Jakhia Green got the only other Jeff Davis hit with a single, and Dee Wooten drove in a run with a sacrifice.
Scott picked up the win, pitching the first four innings and giving up an unearned run on five hits, walking none and striking out three. White earned a save pitching three innings, giving up one earned run on three hits, walking none, and striking out none.
Vidalia brought a speedy team to Hazlehurst Thursday. Both teams had six hits but the Lady Jackets got more out of their offense. The game was tied 2-2 through four innings, but Jeff Davis scored twice in both the fifth and sixth innings to open a 6-2 lead that held up for the 6-3 win.
FeFe Green continued her hot hitting, with a double, a single and two RBI. Carter doubled and drove in a run, Wooten tripled and drove in two runs, and Jakhia Green and Marlee Colson both singled.
Wooten’s triple came immediately after the Lady Indians issued an intentional walk to Williams to put two runners on base. Wooten promptly slapped the ball off the right center field fence to drive in two runs.
White was the winning pitcher in relief. She went three innings, giving up one run on two hits, walking one, hitting one and striking out four. Scott started on the mound and went four innings, leaving with the score knotted at 2-2. She gave up one earned run on four hits, walked two, hit one and struck out four.
Caroline Waters and FeFe Green both had stolen bases.
Score by innings:
JDHS 7 3 7 -17
SVA 0 0 0 – 0