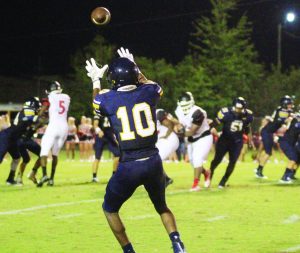 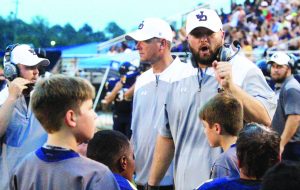 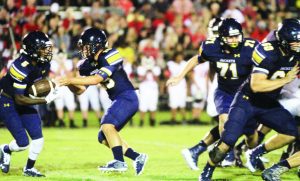 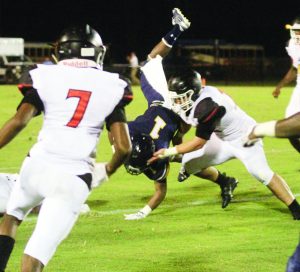 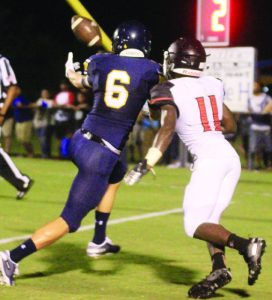 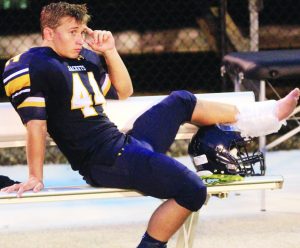 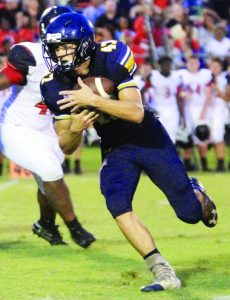 When Jeff Davis High’s football team opens its 2018 season this Friday in Augusta, they’ll face an extremely athletic Glenn Hills team, perhaps the most athletic team they will face all season.
That’s the assessment of second year JDHS Head Coach Lance Helton, who added that the Spartans have a lot of returning starters — four on defense and six on offense.
Helton is familiar with the Augusta area Class AA region Glenn Hills plays in. But with a new head coach this year, there are no game films to break down making preparations by the Yellow Jacket coaching staff difficult and giving the speedy Spartans an edge.
“We’ve got to be very sensitive and pay attention to details of the game on the field,” Helton said.
Helton pointed out that the Jackets lost some talented seniors from last year and said this year’s squad is not as skilled as last year’s. That means the Jackets will have to stick closely to their game plan.
“In general, we have to focus on not allowing penalties and not allow Jeff Davis to beat Jeff Davis,” Helton said.
In the preseason scrimmages against Morgan County and Appling County, both Class AAA teams, Yellow Jacket mistakes made assessing his team difficult.
“I can’t tell you how good or bad we were because of the numerous penalties that stopped our drives,” Helton said. “The team is physical and wants to play hard. But Jeff Davis is beating Jeff Davis. We’ve got to sustain drives of eight plus plays.”
“We can be a very good offense when we can sustain 4- and 14-yd. runs,” he added. “Four yards is what we’re looking for. A big run for us will be 14-20 yards.”
Helton pointed out two keys to the offensive success of his team. Junior quarterback Britt Metts with his arm and junior fullback Jashaun Kirby as the workhorse.
“We have an unproven ‘O’ line,” he said. “It’s about quick maturity. Make no mistake that’s where the game is won.”
Defensively, the coaches are relying on the front seven to carry the football team.
“They have to make a presence on the line and the linebackers have got to drop in their zones and make the play,” Helton said. “Stopping the run is the key to winning high school football games. And we want to just reload when we make personnel changes. In the secondary, they have got to be aware and make plays when the ball is in the air.”
In summary, Helton said, “The biggest thing is to compete. Compete in everything we do. That’s what makes a football team great.”
Helton took time to praise his coaching staff, a group that he believes strongly in.
“I believe in the decisions they make,” he said. “I’m real proud of the work these coaches put in and the community is blessed to have the men around us that we have.”
The assistant coaches are Assistant Head Coach T/TE Greg Nail, Offensive Coordinator QBs Leland Ready, Defensive Coordinator DBs Jacob Lord, Special Teams Coordinator LBs Brian Lawson, Run Game Coordinator WBs Gabe Gay, Split Ends Izell Stephens, Strength and Conditioning DBs Ches Cullens, Defensive Line Tyler Williams, and Trainer Jeff Weems.
In closing, Helton said, “Just score more than they do and we’ll be alright.”