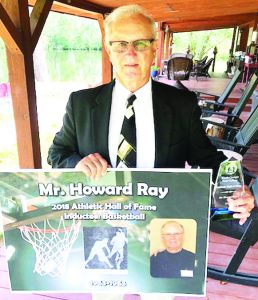 Howard Ray of Hazlehurst was recently inducted into South Georgia State College (SGSC) Athletic Hall of Fame. The gala, awards ceremony and dinner were held June 7 to recognize the newest class of Hall of Fame inductees that have made athletic contributions to the College and to raise funds to support the SGSC Foundation’s need-based scholarship program.
He was a member of the Tiger basketball team under Coach Scotty Perkins from 1963-65. A guard from Jeff Davis High School, he scored 408 points in his freshman year at South Georgia and 450 in his sophomore year. He was voted Most Valuable Player both his freshman and sophomore years and was an All-Region and All-State selection both years.
After South Georgia, Ray went on to play at Augusta College and was selected as captain of the team. Even though Ray only played one and a half years due to a knee injury, he held the “most assists” record. He held the record for many years and is still listed as an assist leader in the gym on campus today.
Ray went on to spend his career in education, holding many leadership positions in the Coffee County school system, and he also served as Executive Director for now Wiregrass Georgia Technical College. He has also been a facilitator with the Big Brothers-Big Sisters program in Coffee and Ware counties.