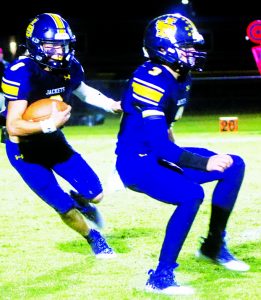 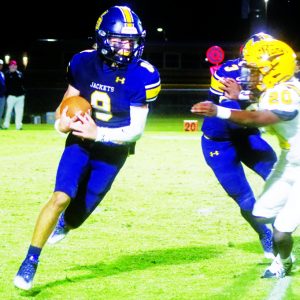 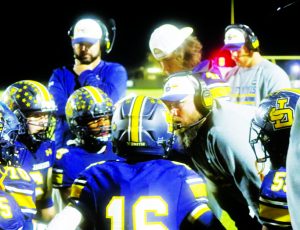 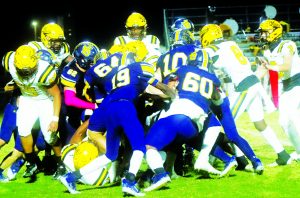 Jeff Davis High’s young football team battled gallantly Friday night against visiting Worth County but the Rams were just too big and experienced for the freshman and sophomore dominated Yellow Jacket squad, rolling to a 43-7 win.
The Rams scored 13 points late in the first quarter and added 21 in the second to take a 34-0 halftime lead. The running clock in the second half went quickly but the Rams left their starters in the game long enough to tack on a field goal and another TD to up the lead to 43-0 before putting their substitutes in the game. Jeff Davis scored on a 43-yd. Ty Weaver run to account for the final score.
Jeff Davis dropped to 0-9 for the season while Worth improved to 7-1.
The Yellow Jacket offense looked good after taking the opening kickoff. They got a pair of quick first downs on a 13-yd. run by Ty Weaver and a 7-yd. pass completion from Colby Beach to Karter Galbreath.
But then the Rams recovered a fumble and took over at their own 48 yard line.
A tough Jacket defense, with Galbreath, Ian McDaniel and Amarion Mitchell coming up with big plays, and a pair of 5-yd. flags left Worth facing a 3rd-and-18 at the Ram 40. But they completed a 21-yd. pass to move the chains.
On the next play, Mitchell stripped the ball from a Worth runner and Galbreath pounced on the ball and the Jackets had the pigskin at their 38.
But the Jackets couldn’t move the ball and Worth then started turning things around. They got a quick first down and then, on 3rd-and-9 from the JD 27, they scored on a long pass into the end zone to get the scoring started. The P.A.T. failed but the visitors led 6-0.
Worth wasted little time scoring again, this time with a 43-yd. pass play for a 1-play strike that made it 13-0.
After the kickoff, the Jackets used an 8-yd. completion from Beach to Peyton Laney, who made a diving catch, and a penalty against the Rams to move the chains. A 15-yd. walk-off against Worth moved the ball to the Ram 39. But the Jackets could get no closer than the 32 where Worth took over own downs.
Worth drove 68 yards in eight plays, scoring on a 21-yd. run, to make it 20-0 with 5 1/2 minutes left in the first half.
But the Rams weren’t through. They took advantage of the Jackets’ freshman and sophomore dominated defensive secondary and drove 67 yards in seven plays, scoring from the one to make it 27–0.
Worth got the ball one more time before halftime at their 42 and drove 58 yards in just three plays, scoring on a 34-yd. pass on the final play of the half and went to the dressing room with a 34-0 lead.
With a running clock in the second half, the third quarter went quickly but the Rams hit a 34-yd. field goal early in fourth quarter to up the score to 37-0.
The Jackets fumbled the ball away on the ensuing kickoff and Worth was in business at the JD 22. They scored in four plays on an 18-yd. pass on 4th-and-6. That made it 43-0.
Jeff Davis finally got on the scoreboard on their next possession. Galbreath ran for 11 yards, Weaver picked up 12, and Galbreath ran for seven more.
Weaver then took the ball up the middle, shook off a pair of tacklers, cut to the right sidelines and raced 44 yards for the score. Fabian Valdelamar kicked the P.A.T. to make it 43-7.
Worth then ran out the clock to end the game.
The Jackets are open this week and close out their season Nov. 4 against Sumter County in Americus.