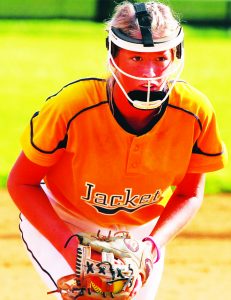 Jeff Davis High School senior pitcher Kelsey Parlor was selected to participate in the 2022 Georgia Dugout Club (GDC) All-State Softball Games held at Truist Park, home of the Atlanta Braves.
The 80 most elite high school football seniors in the state played Nov. 13 on the field at Truist Park which was transformed into a softball diamond. There were four games with a skills competition in the middle of the event.
There were over 300 nominations sent to GDC over a span of three months. Of those nominations 152 players had college commitments and 68 of those commitments were to colleges in Georgia. Parlor has committed to play softball for Georgia College in Milledgeville.
The 2022 selections for the games had an average batting average of .417, an ERA of 2.35, a GPA of 4.1, an ACT score of 23 and an SAT score of 1100.
Parlor had a 2022 record of 26-0 for the 34-1 state champion Lady Jackets. She pitched 145.1 innings, giving up 12 earned runs on 66 hits, struck out 196, walked 45 and had an ERA of 0.578.