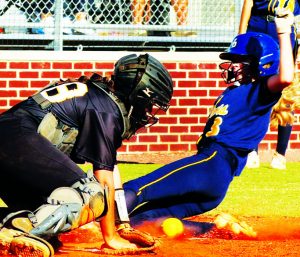 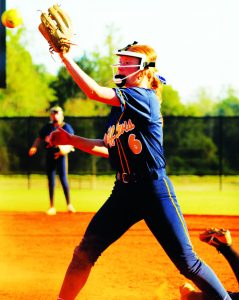 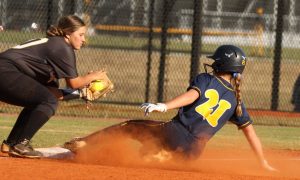 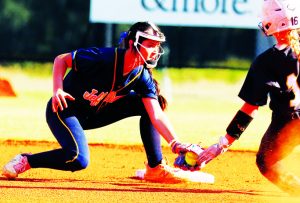 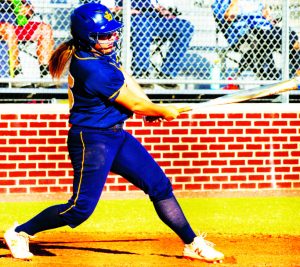 Jeff Davis High improved to 24-1 overall and 16-0 in region play last week as they swept a 3-game series with Cook High.
During last Tuesday’s senior recognition game, seniors Analese Poole, Kelsey Parlor, Payton Thigpen and Maeleigh Burns were recognized, followed by an 8-2 Jeff Davis win. Thursday, the Lady Jackets traveled to Adel and defeated the Lady Hornets 12-4 and 11-2.
The highlight of Tuesday’s 8-2 win was Ella Wood’s 3-run, inside-the-park homer on the fourth inning. That upped the Lady Jackets’ lead from 3-2 to 6-2, putting the win out of reach for Cook.
After Cook scored an unearned run in the top of the first, Burns tied the game in the bottom of the inning with a run-scoring single.
JD added two runs in the second with a 2-out rally. Bentlee Metts singled and scored on a Laisha Hernandez triple. Jenna Miles then drove in Hernandez with a single.
Cook got another unearned run in the third to make it 3-2 and set the stage for Wood’s fourth inning home run. Metts got a 1-out single to start the fourth, Hernandez walked and, with two outs, Wood cleared the bases.
Jeff Davis closed out the scoring in the fifth as Burns and Poole singled, Cori Mims moved the runners up with a sacrifice bunt, and Kira Buford followed with a single to make it 7-2. After Metts walked to load the bases Miles walked to drive in the Lady Jackets’ 8th run.
Woods’ single, homer and three RBI topped the hitting. Burns singled twice and drove in a run, Metts singled twice, Hernandez tripled and drove in a run, Miles had a single and an RBI, Buford had a single and an RBI, and Poole singled.
Parlor got the win, giving up two unearned runs on four hits, four walks and nine strikeouts. The normally solid JD defense committed six errors.
Thursday’s first game was cut to five innings via the run rule, as Underwood was 3-for-4 with two singles, a triple and three RBI.
The defense toughened up from Tuesday’s game as JD had only one error and turned two double plays. The first twin killing came in the first as, with a runner on first, Miles filed a grounder at shortstop, threw to Wood at first and Wood fired a strike to Underwood at third as the runner tried to advance. The second double play came in the fourth. With a runner on first, second baseman Mims took a ground ball, threw to Miles at second and Miles relayed the ball to Wood at first to complete the double play.
A 5-run third inning was the highlight of the game. Miles walked to start the inning, Underwood, Burns, Poole, Mims and Thigpen got consecutive 1-out singles, pinch runner Alera Vann scored on a wild pitch and Metts drove in a run with a sac fly.
Jeff Davis added three more runs in the fourth as Miles singled, Wood doubled, Underwood triple and Burns drove in a run with a sacrifice fly.
A 3-run fifth sealed the deal as Buford singled, Metts and Miles walked, Wood drove in a run with a ground out, and Underwood followed with a 2-run single.
Adding to Underwood’s batting were Burns with two singles and two RBI, Miles with a pair of singles, Metts with a triple and an RBI, Wood with a double and two RBI, Poole and Thigpen with a single and an RBI each, and Mims and Buford with singles.
Parlor was again the winning pitcher. She gave up four runs on eight hits, walked three, hit one and struck out three.
Thursday’s nightcap win was keyed by Miles’ 4-for-5 day at the plate, followed closely by Burns’ 3-for-5 outing.
Miles had a single, two triples and a solo homer, and Burns had a single, two doubles and three RBI.
The Lady Jackets started things with a bang, scoring five runs in the top of the first inning. Miles led off the game with a triple and scored on a wild pitch. Burns and Poole had 2-run doubles.
Miles led off the second with a homer over the centerfield fence and Poole drove in a run as JD’s lead grew to 7-1. Thigpen opened the top of the seventh with a triple, Hernandez and Miles singled and Wood was hit by a pitch to load the bases. Underwood followed with a 2-run double and Burns doubled to score Wood, making it 11-2.
Miles, Burns, Poole, Underwood and Buford all had multiple hits. Poole had a single, a double and three RBI, Underwood had a single, a double and three RBI, Buford had a single and a double, Thigpen tripled, Hernandez had a single and an RBI, and Wood singled.
Carrie Ellen Arnold went the distance on the mound. She gave up one earned run on seven hits, walked four and struck out nine.
Score by innings:
Cook 1 0 1 0 0 0 0 -2
JDHS 1 2 0 3 2 0 x -8