Addison Brewer is on the basepaths 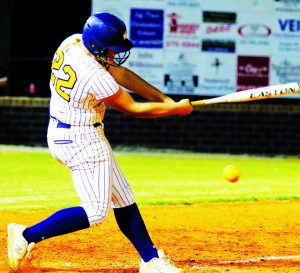 Claire Stinson fouls off a pitch 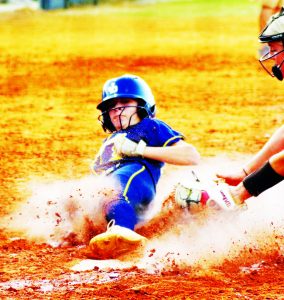 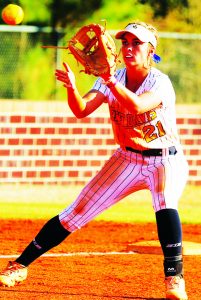 Jaci Underwood has her eyes on the ball 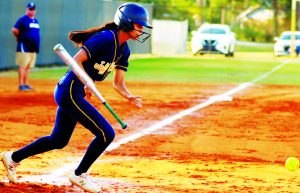 Jeff Davis High held off a late Wayne County rally to take a 5-3 win over the Class 4A Lady Jackets from Jesup. The Class 2A Jeff Davis improved to 27-1 with the win while Wayne suffered only its 4th loss of the season to fall to 18-4.
JD got on the board first with a single run in the third as Laisha Hernandez got a bunt single, stole second and scored on a Jenna Miles double.
In the fifth, Jeff Davis scored three times to go up 4-0. Miles started things with a 1-out walk, stole second, and went to third and then to the plate on an error. Ella Wood followed with a double and scored on Jaci Underwood’s triple. Underwood came home two pitches later on a wild pitch.
The Hazlehurst Lady Jackets made it 5-0 in the sixth as Cori Mims was safe on an error, Payton Thigpen and Hernandez both singled to load the bases, and Mims scored on a wild pitch.
Wayne put a scare in Jeff Davis in the bottom of the sixth with a pair of singles and a 3-run homer by Addie Tyre. Wayne then got the potential tying run on base with a walk and an error but Carrie Arnold struck out the next batter to end the threat.
Analese Poole led the offense with a single and a double, Hernandez had a pair of singles, Underwood had a triple and an RBI, Miles had a double and an RBI, Wood doubled, and Mims and Thigpen both singled.
Kelsey Parlor started on the mound and went four innings, blanking Wayne on one hit, no walks and five strikeouts. Arnold pitched the final three innings, giving up three runs on five hits, walking one and striking out four.
Score by innings:
JDHS 0 0 1 0 3 1 0 -5
WCHS 0 0 0 0 0 3 0 -3 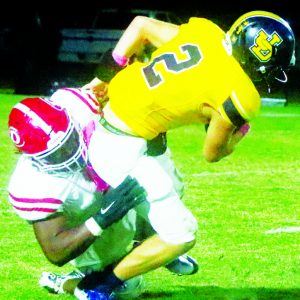