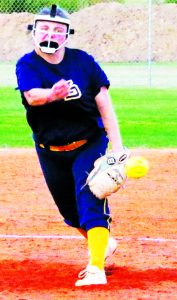 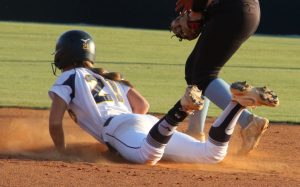 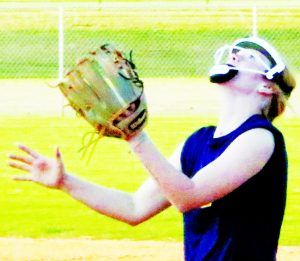 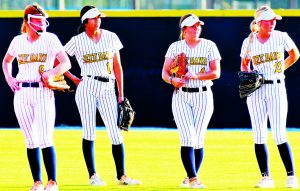 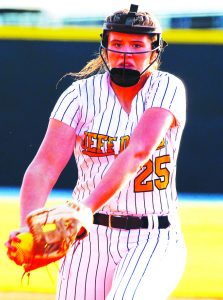 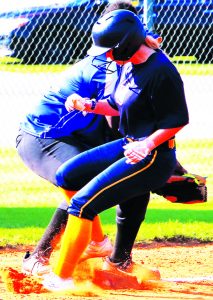 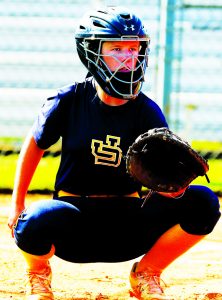 Jeff Davis High’s softball team outscored their opponents 55-0 in four games last week, including a 3-game sweep of Region 1-AA opponent Sumter County. Two of the games were run ruled after four innings and two lasted only three innings.
Tuesday, the Lady Jackets hosted Sumter, winning 12-0. Wednesday, Telfair County visited Hazlehurst and fell 12-0. Thursday in Americus, Jeff Davis got 16-0 and 15-0 wins over Sumter.
In the Sumter series, Carrie Ellen Arnold pitched a no-hitter and Maeleigh Burns pitched a pair of 1-hitters. With Kelsey Parlor’s 1-hit gem against Telfair County, Lady Jacket opponents got only three hits in four games.
Arnold had two no-hitters during the week as the freshman no-hit Telfair County in a Wednesday jayvee game.
The Telfair game lasted only four innings and a big, 10-run third inning was the key to the lopsided victory.
The game had an unlikely ending by the run rule in the fourth as JD loaded the bases on two errors and a walk. Then Ella Wood drew a walk and Jaci Underwood was hit by a pitch, driving in the two runs for the run rule win.
Wood’s 3-for-3, 3 RBI performance led the Lady Jackets’ 10-hit offense. Underwood had a single, a double and three RBI, Jenna Miles had a single, a double and one RBI, Burns singled, sacrificed and drove in a run, Analese Poole and Laisha Hernandez both singled, and Claire Stinson and Bentlee Metts both drove in a run.
Parlor threw a 1-hit shutout, walking three batters and striking out 9.
In Tuesday’s opening game of the 3-game series with Sumter County, Arnold threw a no-hitter in her second start on the mound for the varsity. She hit the lead-off batter in the second and walked the lead-off batter in the third and those were Sumter’s only two baserunners in the game. In both instances, Arnold struck out the side after putting the runners on base. She also struck out the side in the fourth as she got 11 of the 12 outs in the game via strikeouts. Only one Lady Panther batter hit the ball in fair territory, a ground out to third in the first inning.
Leading 10-0 in the bottom of the third, the Lady Jackets scored twice to end the game via the run rule. After Arnold led off the inning by reaching on an error, Payton Thigpen and Metts followed with singles to load the bases. Hernandez then doubled to center field to drive in two runs and end the game.
Hernandez led the hitting with a single, a double and four RBI. Metts had a pair of singles, Wood had a double, a sacrifice fly and two RBI, Miles doubled and drove in a run, Arnold had a single and two RBI, Underwood had a single and an RBI, and Thigpen singled.
Burns started on the mound in Thursday’s first game in Americus and she hurled a 1-hit shutout, striking out seven in the three inning game.
The Lady Jackets wasted no time jumping on the Lady Panthers as they struck for 11 runs in the top of the first inning, sending 17 batters to the plate. The inning was a wild one, with a single, a double, three triples, three errors, four walks, two hit batters and five wild pitches.
Things continued like that in the second, as there were three singles, a triple, a walk, two hit batters and three wild pitches, and JD led 16-0.
The Lady Jackets showed mercy on the Lady Panthers in the third as they took three outs despite a walk and a pair of doubles.
Coach Steven Wilcox gave a lot of his younger players some valuable playing time in the win as normal substitute Jacie Jones had a single and a double and Kalleigh Sellers doubled. Miles had a double, a triple and two RBI, Underwood had a single, a triple and an RBI, Burns singled twice and drove in a run, Wood had a triple and two RBI, Metts had a triple and an RBI, and Thigpen and Poole both drove in a run.
Burns issued only one free pass, a hit batter.
Burns pitched another 1-hit shutout in the nightcap, striking out four and walking two in the 3-inning blowout.
The pitching woes continued for the Lady Panthers as they gave up 12 hits, walked seven, hit four batters, had four wild pitches and did not have a strikeout.
Miles swung the big bat for Jeff Davis with two singles, a double and two RBI, Thigpen had a single and a double and two RBI, Wood had a pair of singles and two RBI, Underwood tripled and drove in two runs, Poole had a double and two RBI, Metts had a single and two RBI, Burns had a single and an RBI, and Jones singled.
Score by innings:
TCHS 0 0 0 0 – 0
JDHS 0 0 10 2 -12