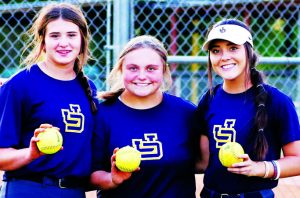 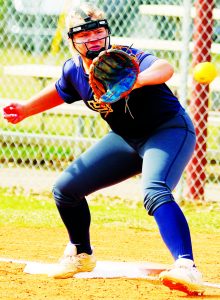 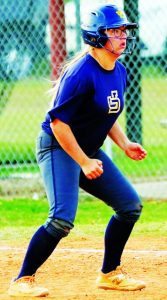 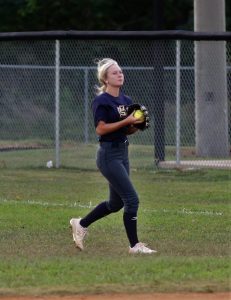 Jeff Davis freshman Carrie Ellen Arnold had quite a week last week for the Jeff Davis High softball team.
She threw back-to-back perfect games as the Lady Jackets blasted Fitzgerald 12-0 Tuesday and routed Worth County 18-0 Wednesday. And in the Worth County game she got her first career homer with a 2-run blast over the center field fence.
In between, the Lady Jackets’ ace hurler Kelsey Parlor threw a 2-hitter as JD topped Worth 9-1 in Wednesday’s first game of a double header.
But the Lady Jacket pitching wasn’t the only highlight of the week as JD got 40 hits in three games, 19 for extra bases.
Jaci Underwood led the way with six hits including three doubles and two triples, and drove in eight runs. Ella Wood also had a hot bat with five hits, including two doubles and two triples, and five RBI. Laisha Hernandez also had five hits.
Jenna Miles had four hits with a pair of doubles and a home run, Claire Stinson doubled three times, Arnold and Maeleigh Burns both homered, Payton Thigpen added four hits with a triple and Parlor collected a double.
In the Fitzgerald game, Arnold needed only 44 pitches in the four inning game. She struck out nine and the defense played without an error although they had only three chances. Arnold struck out the first nine batters she faced until the fourth when Underwood fielded a grounder at third and threw to Wood at first for the out. In the fourth inning a Fitz batter popped out to Ryleigh Sellers at second base and for the final out of the game, Wood fielded a bunt and threw to Sellers at first for the out.
In the first game against Worth County, Parlor retired the first 12 batters she faced, 10 by strikeout. The fifth inning was the only time the Lady Rams were able to get on base as Worth’s Kasey Lunn opened the inning with a solo home run. But Parlor got a pair of strikeouts to end the inning, and two more strikeouts in the sixth, giving her 14 Ks for the game. She did not give up a free pass.
In the first game against Worth, Miles led off for the Lady Jackets in the top of the first and slapped the third pitch of the game over the left field fence for a 1-0 JD lead.
The Lady Jacket bats went to work in a 4-run second inning as Stinson doubled, Thigpen and Wood both tripled, and Underwood and Burns followed Wood’s triple with back-to-back singles.
In the third, Parlor and Hernandez both drove in runs with a double and a single respectively, to up the score to 7-0. Ella Wood drove in a run with a double in the fifth, and Thigpen drove in a run with a single in the sixth.
The Lady Jackets had 14 hits led by Wood with a double, a triple and two RBI. Thigpen had a single, a triple and two RBI, Hernandez singled twice and drove in a run, Stinson had a single and a double, Buford had a pair of singles, Miles had a solo homer, Parlor doubled and drove in a run, Underwood had a single and an RBI, and Burns singled.
The JD bats collected 18 hits in the second game against Worth.
Underwood topped the offense with a single, two doubles and three RBI. Arnold also had three hits with a pair of singles, a homer and 3 RBI, Burns had a single, a homer and three RBI, Miles had a single, a double and two RBI, Wood doubled, tripled and drove in three runs, Hernandez singled twice, Stinson had a double and two RBI, and Cori Mims, Sellers and Thigpen each singled.
Score by innings:
FHS 0 0 0 – 0
JDHS 9 0 3 x -12