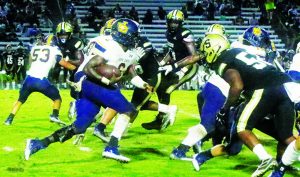 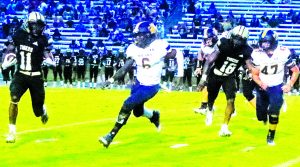 The first half of Friday night’s Jeff Davis-Swainsboro football game was a nightmare for the Jackets as they had turnovers on four of their five first half possessions and found themselves down 40-0 at halftime. The Tigers scored only once in the second half for a 47-0 win.
Swainsboro scored on the first play of the game on a 44-yd. run, hit paydirt with a 44-yd. pass on the second play of their next possession, scored on an 8-play drive that extended to early in the second quarter, recovered a fumble at the Jacket 19 and scored in one play, picked up a Jacket fumble and returned it 19 yards for a score, and finally returned an interception 48 yards to the Jacket 8 to set up their final first half TD.
Swainsboro returned the opening kickoff all the way to the Yellow Jacket 44 and scored on the first play of the game on a 44-yd. sweep around the right side and the Tigers led 7-0 before many of the fans had gotten settled into their seats.
Terrance Clemons returned the ensuing kickoff to the JD 41 for the Jackets’ first possession. The Jacket offense put together a six play drive to the Tiger 34 before a fumble gave Swainsboro the ball.
The Tigers scored in five plays, getting the touchdown on a 44-yd. pass play and JD trailed 14-0.
Swainsboro’s next possession started at their own 33 and they scored two plays later on a 52-yd. run that was nullified by a penalty. Six plays later they scored on a 4-yd. run early in the second quarter to up the lead to 21-0.
On the Jackets’ next possession they went backward thanks to a 15-yd. penalty. A fumble gave the Tigers the ball at the Jacket 19 and they scored on the first play. The P.A.T. attempt failed as Swainsboro led 27-0.
On the first play after the kickoff, the Jackets fumbled again and a Tiger defender scooped up the ball and returned it 19 yards for a 33-0 Swainsboro lead. The P.A.T. kick sailed to the left.
After the kickoff, the Jackets got their second first down of the game on an 8-yd. pass from quarterback Colby Beach to Clemons.
Clemons ran twice to pick up another first down at the Swainsboro 47 where a penalty backed them up, making it 1st-and-15 at the Jacket 48.
Two plays later, the Tigers intercepted a pass at their 44 and returned the ball all the way to the Jeff Davis 8 yard line. A 5-yd. penalty back up the Tigers and the Jacket defense tightened up. But on 4th-and-goal from the 14, a Tiger receiver made a diving catch in the end zone and Swainsboro took a 40-0 lead into the dressing room at intermission.
On the Tigers second play of the second half, a high snap got away from the Swainsboro quarterback, but he scooped up the ball at the 36, raced around the left side and ran all the way to the end zone for a 47-0 Tiger lead.
With the running clock after halftime, the second half went quickly with Swainsboro eating up most of the time on an 11-play possession.