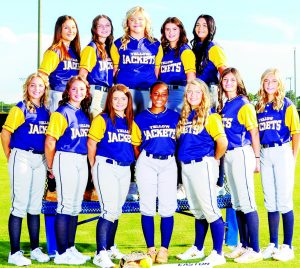 Jeff Davis High’s jayvee softball team improved to 4-0 last Wednesday with an 11-0, 5-inning win over visiting Montgomery County as Cori Mims pitched a perfect game, retiring all 15 batters she faced.
Monday, Carrie Ellen Arnold pitched a 1-hit shutout as the Lady Jackets defeated Wayne County 12-0 in four innings to improve to 5-0.
Mims struck out 11 in her Wednesday game.
Mims also led the offense with a double, a triple, three stolen bases and an RBI. Carrie Ellen Arnold had a single and a double, Jacie Jones had a single, a sacrifice and two RBI, Alara McCall singled and drove in a run, Kira Buford, Claire Stinson and Alera Vann each singled, and Emma McEachin had an RBI.
Against Wayne County, Mims again led the offense with a single, a double and two RBI. Vann had a pair of singles, McCall had a triple and three RBI, Stinson had a single and two RBI, McEachin, Payten Warnock and Makinzee Ashmore each had a single and an RBI, and Arnold and Ryleigh Sellers each singled. McEachin also had a sacrifice fly.
Arnold did not give up a free pass, facing only 13 batters as she fanned seven. She had a not hitter going with two outs in the final inning before giving up her first and only hit, a harmless single.
Score by innings:
MCHS 0 0 0 0 0 – 0
JDHS 2 8 1 0 x -11