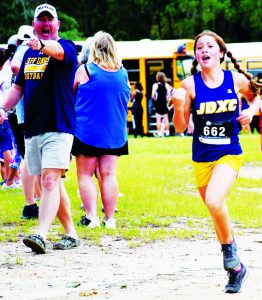 The Jeff Davis Cross Country programs opened the season by hosting the 2nd Annual Peach State Preview. The event brought in over 350 runners from eight middle schools and 14 high schools. The Jeff Davis squads swept all four races and dominated the team and individual awards.
The high school boys started the event with an upset win over Vidalia who was projected a 20 point favorite going into the meet. Junior Kevin Vega led the charge for the Jacket boys with a second overall finish. Three more Jackets placed in the Top 10 and received individual awards: Pierce Parlor (6th), Josue Avila (9th), and Gael Valora (10th).
In the high school girls race Senior Alexandra Uribe led the way with a 3rd place finish. Uribe was the only Lady Jacket to place in the Top 10 but the team ran away from the field, as the closest team to the Lady Jackets was Wayne County who was 20 points back.
The middle school teams also performed well and ran away from the competition.
In the boys race newcomer Mario Franco finished second overall behind Juan Luna of Toombs County who was the Middle School State Cross Country Champion last year in the small school division. Jair Valdelamar (4th), Owen King (6th), Luke Relihan (10th) also finished in the Top 10. Weston Joyce (11th) and Peyton Hamilton (13th) just missed the Top 10.
The middle school Lady Jackets were the most dominant team of the day, as seven Lady Jackets finished in the Top 10 and two more finished 11th and 12th, as the Jeff Davis held nine of the first 12 spots. Mattie Claire Worthington (2nd) and Avery Haley (3rd) were narrowly edged out by Dileta Hunlen of Pulaski Middle School. Mayrani Trejo (4th), Marley Powell (7th), Laysie Lewis (8th), Aurie Taylor (9th), and Fernanda Valdelamar (10th) rounded out the top individual spots.
The high school team will be back in action this Saturday as they travel to north Georgia to race in the Pickens Preview meet. The middle school will be back in action next week at the Cecil Field Classic in Jacksonville, Fla.
The teams thank the Heritage Center at Towns Bluff Park for allowing them to use the trails for the event. Special thanks to the Jeff Davis Recreation Department who helped mow the facility before the races and the Jeff Davis Tennis program who ran the parking for the event.