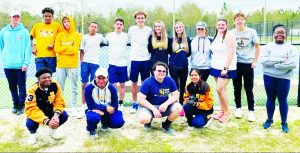 Jeff Davis High School tennis started the season last week with two matches. Jeff Davis faced off with the Hurricanes from Fitzgerald Jan. 25 at home. Both Jeff Davis boys and girls swept the canes 5-0.
Coach Mary Katherine Kemp bragged on the play from John Graham for his work on the doubles court. John loves to volley. He just finds the ball and puts it away.
On Wednesday, JDH traveled to Brantley County. The boys lost 0-5 to the Herons. The girls pulled out a close one with a 3-2 win.
Coach Kemp applauded the play of Cam Lewis in his 1st singles position for the boys. He played really well against some tough competition. Coach Kemp also noted the play from senior MaKenzie Gardner at her doubles position. She hustled hard and fought hard in her match against the Herons.
JDH played at home again against Wayne County Feb. 1.