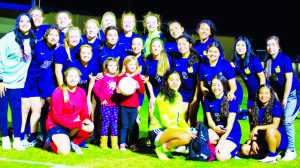 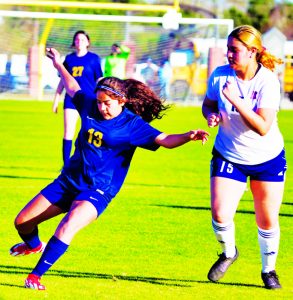 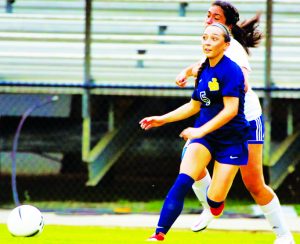 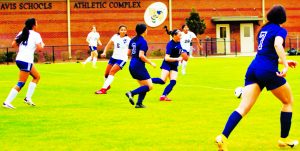 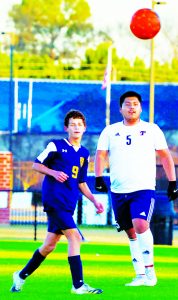 The Jeff Davis girls varsity soccer team opened the season with three consecutive wins. The Lady Jackets offensive presence has been too much for the first three opponents, averaging almost 5 points per game, while the defense has also been stellar, only allowing 2 goals in those three games.
The Lady Jackets opened the season with a 4-1 victory in the scrimmage game against West Laurens. Zoe Spencer led the scoring charge with a hat trick (3 goals) in the first half. Madison Stevens added a fourth goal. The defense conceded a goal with only 11 seconds remaining in the second half for a 4-1 final.
In the regular season opener against Long County, five Lady Jackets scored goals as they cruised to a 5-0 victory. Flor Rangel, Marili Grimaldo, and Sandra Trejo all had goals in the first half to take a 3-0 lead into halftime. Payton Thigpen scored the first goal of the second half, while Zoe Spencer added the fifth goal. Goalie Selines Flores and the defense were perfect keeping the Lady Blue Tide from scoring.
In the next game, the Lady Jackets faced off with Tattnall County. The Lady Warriors from Tattnall dominated the Lady Jackets last year in a 5-1 game. The Yellow Jacket squad came out determined to not let the same thing happen this year. Sandra Trejo scored the only goal of the first half on a free kick from just outside the box. Flor Rangel scored the second goal of the game just 30 seconds into the second half. Zoe Spencer headed in a third goal on a missed shot by Joselyn Avila. Tattnall County added a quick goal to make the score 3-1 but couldn’t get anything else going, as the Lady Jackets added goals by Joselyn Avila and Zoe Spencer for the 5-1 final.
The dominant play early in the season has turned some heads as the Lady Jackets are ranked for the first time coming in at #8 in the first coaches poll of the year. The Lady Jackets will be tested this week however as they play three games during the week. In the first game of the week they will travel to face off with 2021 Region 2-AA champ East Laurens who has struggled to a 1-3 start. The Yellow Jacket squad will then travel to #6 ranked Bleckley County, who is 6-1 on the season. In the final game of the week, rival Appling County comes to town.