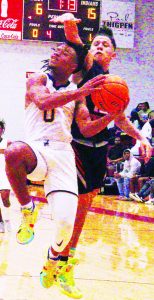 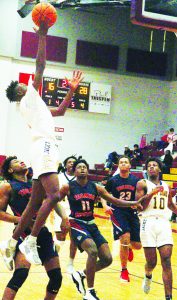 Both Jeff Davis High basketball team qualified for the 2022 Georgia High School Association Class AA State Playoffs by finishing fourth in the Region 2-AA tournament played last week in Vidalia.
The girls of Coach Nikki Perry struggled for much of the season but entered the tournament as the No. 5 seed after finishing the regular season with a 5-18 record. Last Tuesday they got past No. 4 seed Bacon County to qualify for a state playoff spot. Thursday in the semifinals they fell to Swainsboro 61-31 and in Friday’s consolation game they lost to Vidalia 41-27. They carry a 6-20 record into the playoffs.
The boys of Coach Bo Boatright defeated East Laurens last Tuesday 66-45 to earn a playoff spot for the third straight season. The Jackets then fell to No. 1 seed Vidalia 67-42 in the semifinals and in Friday’s consolation game they saw a big first half lead evaporate in the second half as Toombs County pulled out a 55-52 win.
Both teams had their hands full in the opening round of the state playoffs with No. 1 seeds from Region 4-AA. The Lady Jackets traveled to Augusta to take on T.W. Josey High School and the boys were in Augusta also, facing Westside High School. The Josey girls are 21-5 on the season and the Westside boys are 23-3.
MaxPreps ranks the Westside boys No. 3 in the state while ScoreAtlanta ranks them No. 5.
Josey is ranked No. 4 by MaxPreps and No. 9 by ScoreAtlanta.
First round Class AA Girls State Basketball Playoffs:
Feb. 22
Butler at Swainsboro
Jeff Davis at Josey
Vidalia at Laney
Oglethorpe at Woodville-Tompkins
Fitzgerald at Dodge
Gordon Central at Callaway
S. Atlanta at Elbert
Washington Co. at Early
Temple at Fannin
Banks at Pace Academy
Union at Columbia
Model at Heard
Bergen at Northeast
Lovett at Rabun
Haralson at Chattooga
Lamar at Thomasville
First round Class AA Boys State Basketball Playoffs:
Glenn Hills at Vidalia
Jeff Davis at Westside, Aug.
Toombs at Butler
Putnam at Woodville-Tompkins
Berrien at Northeast
Coosa at Callaway
Lovett at Union
Dodge at Early
Bremen at Chattooga
Banks at Columbia
Elbert at Pace Academy
Dude at Heard
Cook at Washington County
Therrell at Rabun
Temple at Model
Jasper at Thomasville