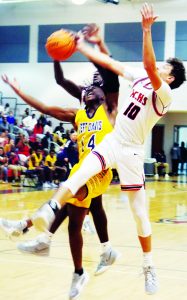 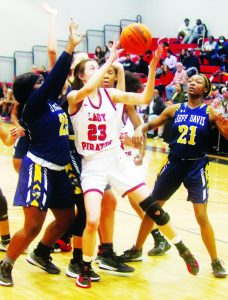 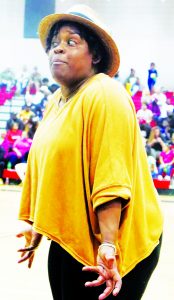 Jeff Davis High’s basketball play was suspended for a week earlier in January, forcing a rescheduling of a number of games.
Since the teams have resumed action, the Lady Jackets of Coach Nikki Perry and the boys of Coach Bo Boatright have both won 2 0f 3 games.
The first night of action in 2022 came last Tuesday in McRae where the girls fell to Telfair County in a close one, 56-52. The Jacket boys took a 50-43 win in the nightcap.
Friday and Saturday of last week, the girls won both their games and the boys split.
The Friday game was a Region 2-AA contest in Lyons as the Lady Jackets got their first region victory of the season 46-41 and the boys topped the Bulldog boys 62-52.
Saturday night in Baxley, the girls got off to a slow start, trailing the Lady Pirates of Appling County 11-2 after one quarter. But after that, the JD girls out-scored Appling 41-18 to win going away, 43-29.
Seniors Morgan Yearty and Jekiya Smith and freshman Autumn Rhodes have been key elements in the Lady Jackets’ turnaround after the Christmas holidays.
In the boys’ contest, the Yellow Jackets took control early and held a solid lead by intermission. But the Pirates roared back in the second half to take a 70-64 win.
The Friday and Saturday games for the boys were played without two of the Jackets’ leading players as senior Mike Dotson and C.J. Parker were on a football recruiting visit and were unable to play.
Seniors Blan Swain and Brian Sturgis more than took up the slack against Toombs, getting 21 and 30 points respectively and a lot of younger Jackets got a lot of valuable experience as the floor was full of blue-and-gold young guys both in Lyons and Baxley, and they performed well.