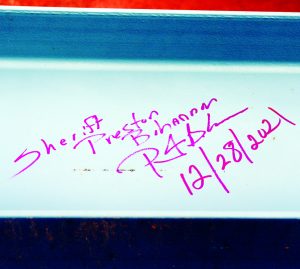 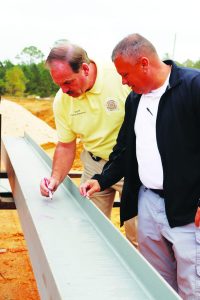 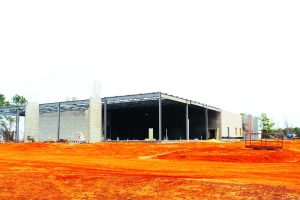 Work is progressing nicely on the new law enforcement complex for the Jeff Davis County Sheriff’s Department (above, right). The building is located on the Lumber City Highway, just outside the city limits of Hazlehurst. Sheriff Preston Bohannon said this week he expects the entire complex to be completed by about this time next year. In center photo, Sheriff Bohannon is pictured signing an I-beam that will go over an entrance to the facility, as Chief Deputy Keith Rea looks on. Left is the Sheriff’s signature.

Work is well underway on the new Jeff Davis County law enforcement complex, which is under construction on the Lumber City Highway, just outside the city limits of Hazlehurst.
The land for the building was purchased by the Jeff Davis County Commission from Woody Folsom Chevrolet etc., and once was used to hold excess inventory from the old Woody Folsom Chevrolet site across Highway 341 from the new jail site.
The project has been years in the making as the County Commission used proceeds from the one percent Special Purpose Local Option Sales Tax (SPLOST) to amass funds over a number of years. Little was done on the project for years as the Commission and Sheriff Preston Bohannon waited patiently to build up the SPLOST funds designated for the new jail/Sheriff’s Department offices, rather than borrowing the necessary funds and accumulating interest costs. The wait will prove to save money for local taxpayers.
Tuesday morning, Sheriff Bohannon and Chief Deputy Keith Rea were at the site where they put their signatures on one of two huge I-beams that will span two major entryways to the complex. They were among the last to sign the I-beams as members of the County Commission, the county staff, deputies, E-911 operators and other law enforcement-related persons had already added their signatures to the beams.
The law enforcement offices should be completed in the coming months but Sheriff Bohannon said he expects it will be about this time next year, or close to 2023, before the detention center portion of the complex is completed.