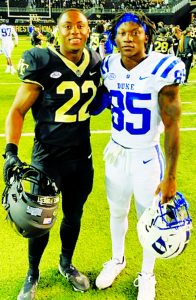 Burketts Ferry residents Jesse and Gwendolyn (Sharpe) Hagans had plenty to be proud of during the fall football season.
Their grandson William Towns of New Jersey and nephew Samir Hagans of Philadelphia were among the nation’s top recruits for the Class of 2021 and this fall landed full scholarships to play Division I football.
Years after competing against each other in middle school at the national American Youth Football championships in Orlando, the two 19-year-olds are now in North Carolina — and are competing again.
Running back William (black and gold jersey, #22) is at Wake Forest University in Winston-Salem and wide receiver Samir (blue and white jersey, #85) is at Duke University in Durham. Their teams faced off against each other during the Wake vs. Duke match in October, and the boys took time afterward for a friendly family photo and BBQ.
The family will be together again at the Gator Bowl when Wake Forest takes on Texas A&M.