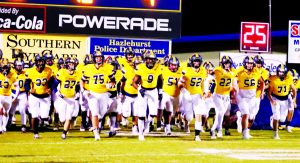 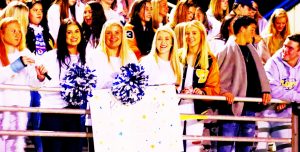 By TOMMY PURSER
Editor-Publisher
When 10-1 Jeff Davis High’s football team meets 10-1 Rabun County this Friday night in Tiger, Yellow Jacket fans will get their first look at one of the most highly recruited quarterbacks in the nation.
Senior Gunner Stockton has set the high school football world on fire since he first suited up as a freshman Wildcat
Last week, the Georgia commit accounted for 456 yards, passing and rushing, to lead Rabun over Pace Academy 63-14 in the first round of the Class 2A playoffs. He was 18-of-21 passing for 302 yards and five touchdowns, and added another 154 yards and two scores on 12 carries.
So far this season Stockton has passed for 3,228 yards and 44 touchdowns with just one interception. He has rushed for 630 yards and nine TDs.
For his 4-year career, he passed for 13,048 yards and 171 TDs, and rushed for 4,200 yards and 73 touchdowns.
There are two big differences between Jeff Davis and Rabun County. While Rabun relies almost exclusively on Stockton for offensive production, the Yellow Jackets have a virtual arsenal of offensive weapons. All three of the Jeff Davis running backs, wings senior Aahiyus Allen and freshman Kyrese Hunt, and fullback sophomore Kiyon Dotson can score from anywhere on the field. And quarterback Tyson Alls, while small, is extremely quick and presents a real threat when defenses begin to key on the others in the backfield.
Add to that the running talents of wide receivers seniors C.J. Parker and Michael Dotson, who get plenty of opportunities to run the football.
Coach Lance Helton’s offense has developed an unusually wide variety of formations that serve to keep opposing defenses off guard. From those formations, any one of six players can get the football on any given play.
And just as defenses begin to concentrate too much on stopping the run, Dotson can go to the air, with Parker his favorite target.
The second big difference is the emphasis on defense Coach Jay Cravey has added to the team’s forte.
The Jacket offense has proven to be able to control the football for long periods of time. That fact, and Coach Cravey’s swarming defense, have resulted in the Jackets having the best scoring defense in Class 2A in the state, giving up a mere 5.4 points per game.
The 2021 Yellow Jackets have the biggest — and quickest — offensive and defensive lines the school has had in decades. The big front walls have been the key for the Yellow Jackets on both sides of the ball.
And the defense has a wealth of aggressive talent in the backfield as well. There have been many outstanding individual efforts from virtually every player on the defensive side of the football.
And the offensive line has proven to be adept at opening huge holes in the defense throughout the season, and Jacket ball carriers, more times than not, find themselves with plenty of room to run.
A lot of longtime Yellow Jacket football fans have posited the belief that this year’s Yellow Jackets may be the best Jeff Davis High School has ever fielded. And the team may have the best shot of any team in the state to stop the No. 1 ranked Wildcats.