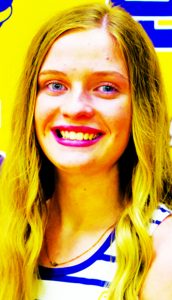 Runner of the Week
Lily Relihan

Runner of the Week
Josue Avila

The Jeff Davis cross country teams competed at the Region 2AA Championship Oct. 28 at Toombs County High School.
This was the first time in six years that the Jeff Davis program has not hosted the region championship at either the Heritage Center at Towns Bluff or at Jeff Davis Middle School. Coach Jeremy Moore of Toombs did a great job of hosting the meet despite the terrible weather, as teams had to not only face the competition but the cold, windy, and rainy conditions.
The JDXC squads rose to the occasion despite the weather to take both the boys and the girls Region 2AA titles, while seniors Briley Reyes and Zoie Marchant were the individual region champions.
In the boys race, the pace was fast from the gun with the Jeff Davis and Vidalia runners battling for the top spots. Reyes began easing away from the pack with about half a mile to go to claim the individual region title with a time of 17:16. Cravey (3rd), Parlor (4th), and Manning (5th) finished in the Top 6 to make the All-Region team.
The remaining Yellow Jacket runners Vega (8th), Avila (13th), and Barragan (16th) had outstanding performances as they finished in the Top 16. The Vidalia team made a valiant effort to keep the score close but the Yellow Jacket squad pulled away late in the race to claim back-to-back Region 2AA titles, the first time in program history the boys team has won back-to-back titles.
In the girls race, the pace was fast but the racing was a little more strategic as the Jeff Davis and Vidalia runners jockeyed for position the entire race. The runners from Vidalia and Jeff Davis broke into three separate groups by the 2-mile with the team scores virtually even at that point.
Marchant then made her move to take the lead and hold on to finish first with a time of 20:18 and claim her fourth straight individual region title. Uribe (3rd) and Rangel (6th) finished as All-Region runners.
Relihan (7th), Avila (10th), Lopez (11th), and Lewis (12th) rounded out the remaining spots for the Lady Jackets all running exceptionally well. Despite the Lady Indians getting their five scorers in before the Lady Jackets five scorers, the JD squad held the right positions as they narrowly edged out Vidalia with a 27-28 score making it the sixth straight region title for the Lady Jackets.
The Jeff Davis teams also had a record setting day. Five boys (Reyes, Cravey, Vega, Avila, Barragan) and five girls (Uribe, Rangel, Relihan, Lopez, Lewis) ran personal best times to close out the year. In addition the boys set the Fastest Team Average at 17:45 as well as the Lowest Region Team Score with 21 points by any JD boys team.
Reyes ran the fastest time at the region meet by a JD runner and the girls team set the Fastest Region Team Average at 22:13 by any JD team and Marchant lowered her previous region record time to 20:18.