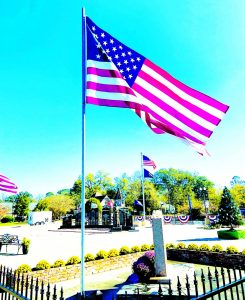 Jeff Davis County Veterans Association will hold its annual Veterans Day ceremony Nov. 11 at 11 a.m., at Veterans Square Park.
“We’re excited to have this year’s Veterans Day program since last year’s was cancelled because of the pandemic,” said Roy Anderson, president of the Veterans Association. “It is our special way of commemorating our veterans from World War I until now.”
Guest speaker is U.S. Army veteran Terry Powell.
Powell, the son of the late Foster H. “Junior” Powell and Alma Smith Powell, was born in Jeff Davis County. He graduated from Jeff Davis High School in 1967 and went to work at Hazlehurst Mills before being drafted into the army in 1969. His basic training was at Fort Benning before transferring to Fort Lee, Va., and then Fort Riley, Kan. In January 1971, he served in Vietnam while stationed at Cam Rahn Bay and was honorably discharged a year later.
Over his post-army career, Powell earned an accounting degree from Valdosta State and worked at Hazlehurst Mills, Bainbridge Mills, Bainbridge Color Plant, Bainbridge Filament Plant and Andalusia Mills, which was purchased by Shaw Industries. He retired from Shaw in January, 2016, with 46 years, most of the those in accounting roles, with the last 40 served consecutively.
Powell also served in a number of roles in community and church service, including as a Sunday School teacher and deacon with First Baptist Church of Andalusia, president of the Andalusia Kiwanis Club, on the board of trustees of Andalusia Health Hospital, on the Andalusia City Council, and as pastor of Mobley Creek Baptist Church.
Powell is married to Suzanne McRae, daughter of the late Dr. Daniel H. and Mrs. Dorothy Stewart McRae. The couple has two children, Kyle and Katelyn, and six grandchildren.
Also during the Veterans Day ceremony, recently-inscribed names of veterans with Jeff Davis County connections will be read, followed by a segment recognizing Vietnam veterans and other special events and music.
Veterans will be on hand to help with anyone who needs assistance or has questions about the organization.