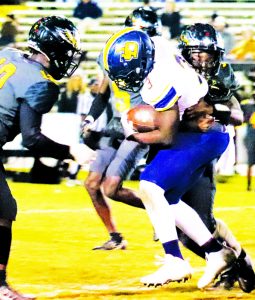 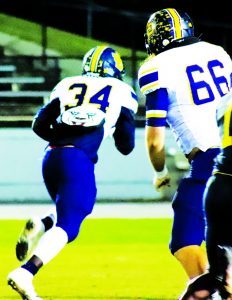 Kiyon Dotson breaks into the open 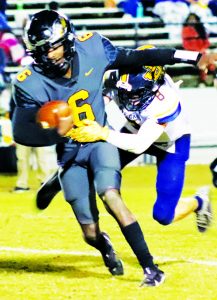 Kade Harpe gets a sack 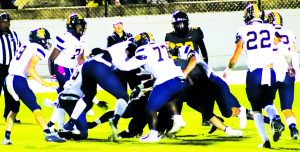 The Jacket defense swarms around a riunner 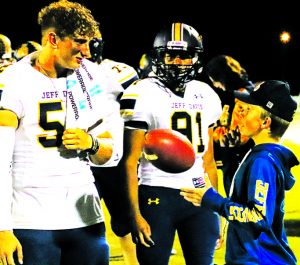 A ball boy chats with an injured Dalton Sellers

Perhaps a little flat from their heartbreaking loss to Swainsboro the week before, Jeff Davis High’s football team got off to a slow start Friday night in East Laurens.
But once things began to click for the Jackets they rolled to an easy, 43-0 win over the homestanding Falcons as they improved to 9-1 for the season, 4-1 in the region. East Laurens fell to 5-4 and 1-3.
Coach Lance Helton’s charges have this week off and, with a 2nd place regular season finish in Region 2-AA, they will host the first round of the playoffs Nov. 12, probably facing Jefferson County, the team that eliminated the Jackets from postseason play last year.
East Laurens took the opening kickoff and picked up a couple of first downs on 17- and 32-yd. pass completions, the latter coming with a Falcon receiver somehow coming up with the catch between three Jacket defenders.
The second completion overcame a 5-yd. sack by Dalton Sellers and Miyon Connaway and put East Laurens at the Jacket 25.
But Cain Lopez penetrated the line and Kade Harpe flushed the runner and a host of Jackets threw him for a loss. On 4th down, Tre Chandler and Connaway met at the quarterback for another sack and the Jackets took over on downs at their 28.
The Jeff Davis defense had a hard time getting in gear as they did not pick up a first down on their first three possessions, and turned over the ball on a fumble early in the second quarter at their own 42.
Two plays later, Terrance Clemons picked off a long pass at the 18, sidestepped a Falcon at the 25 and, with the JD defenders turned into effective blockers, raced untouched all the way to the end zone for an 82-yd. interception return. Angel Mendez added the extra point and it was 7-0 with 9:33 left in the first half.
The defensive touchdown seemed to put a spark in the Yellow Jacket offense as the offensive line began showing its dominance and the Jackets scored in a hurry on their next possession. Kiyon Dotson darted through a huge hole carved out by the offensive line and darted 81 yards, untouched for a 13-0 lead. Mendez kicked the P.A.T. and it was 14-0.
The Jacket offense hurriedly covered 65 yards in six plays on their next possession to go up 22-0.
With leading rusher Aahiyus Allen held out of the game with an injury, there were plenty of weapons to take up the slack. C.J. Parker had a 15-yd. run, Terrance Clemons ran for a 17-yd. pickup, quarterback Tyson Alls hit tight end Matthew Glass for 21 yards and Michael Dotson covered the final 10 yards around the right side for his second TD of the game. Kyrese Hunt ran for the 2-pt. conversion to make it 22-0.
The Jackets’ next possession started at the Falcon 25 after Connaway jumped on a Falcon fumble. While Parker followed perfect blocking to score from the 16, a penalty nullified the score. Time ran off the clock on the score and the Jackets should have been given an untimed down, but the officials blew the call and called the half to an end with JD on top 22-0.
On the second play after the second half kickoff, Alls delivered a strike over the middle to a wide-open Clemons who raced 75 yards for the score. Mendez made it 29-0.
Following the ensuing kickoff, Lopez and Landon Roberson had back-to-back tackles for losses and, on 3rd-and-12, East Laurens went to the air. Harpe picked off the pass at midfield and returned the ball to the Falcon 32. A penalty against East Laurens moved the ball to the 16 and Parker covered the distance in one play, another picture-perfect example of good offensive blocking. Mendez’ kick made it 36-0, still in the third quarter.
After the defense held East Laurens to a 3-and-out, the Jackets took over at the 57 and, again, scored in one play. The offensive line mauled the Falcon defense once again and M
Kiyon Dotson raced 53 yards for the score. Oscar Marquez booted the extra point and it was 43-0.
After the kickoff, East Laurens got a couple of first downs on a 17-yd. reverse and an 11-yd. pass completion. But Harpe blew in for a 5-yd. quarterback sack and East Laurens turned over the ball on downs at the JD 34.
Kiyon Dotson picked up a 1st down with a 10-yd. run and, two players later, Hunt broke loose for a 23-yd. jaunt on the first play of the 4th quarter.
With the No. 2 offense on the field, the Jackets were unable to move the chains and Harpe punted the ball all the way down to the East Laurens six.
The Falcons then ran out the clock, moving the ball from their six to the Jacket three as the clock ticked down to zero.