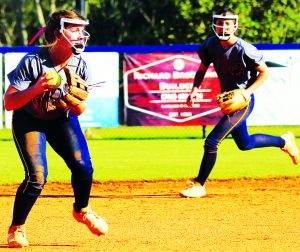 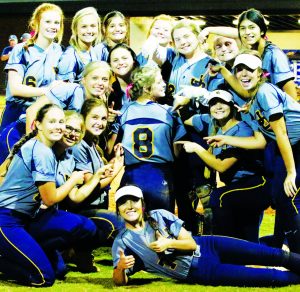 Jeff Davis High’s softball team made it to the final eight and a trip to Columbus this week for the Class AA State Tournament.
The Lady Jackets earned the trip to the Elite Eight with a 2-0, 8-0 sweep of Banks County last week in Homer, and they now have four shutouts in four playoff games, outscoring Putnam County and Banks County by a collective 39-0.
The 25-6 Lady Jackets will play Chattooga (20-5) in an 11 a.m. game Thursday in Columbus. A win will put them in a 7 p.m. Thursday game against the winner of Lovett (22-11) and Heard County (22-10). A loss will drop them into the losers bracket for a 10 a.m. Friday game against the Lovett-Heard loser.
In other tournament games, Vidalia (28-5) meets Bremen (22-7) and Dade County (26-2-1) faces Union County (13-9).
In the opening game against Banks County, the Lady Jackets got all the runs they needed as Ella Wood walked, stole second and scored on a Maeleigh Burns double.
The next 11 Jeff Davis batters went down in order until Bentlee Metts and Laisha Hernandez got back-to-back, 2-out singles in the fifth. They made it a 2nd and 3rd but a ground out ended the inning.
Jeff Davis added an unearned insurance run in the sixth as Jaci Underwood reached first on an error and scored on Burns’ second run-scoring double of the game.
Banks County got runners on base in six of the seven innings, but each time either pitcher Kelsey Parlor or the Lady Jacket defense came through. In the fourth, Banks got a 1-out single but first baseman Annalese Poole fielded a bunt, threw to second baseman Wood who was covering first, and Wood threw to Underwood at third to catch the lead runner in a run-down. Underwood threw to shortstop Miles who relayed the ball to left fielder Hernandez who alertly came in to join the rundown. Hernandez put the final tag on the runner.
Burns’ two doubles and two RBI topped the offense. Metts and Hernandez both had singles as the Lady Jackets were limited to four hits.
Parlor pitch a 3-hit shutout, giving up three harmless singles. She walked three, hit two and struck out four.
The nightcap was easier as Parlor threw a 1-hit shutout, her third shutout in four playoff games and the Lady Jackets banged out 10 hits to win in six innings.
Jeff Davis broke open a scoreless game with a 3-run third. Miles drew a 1-out walk, stole second and took third on a wild pitch. Wood then reached on an error to drive home Miles and went to second on an error. A wild pitch enabled Wood to go to third and Underwood lofted a sacrifice fly to center to score Wood. Burns then singled, Alicia Lilliott doubled and Burns scored as Kalleigh Sellers was safe on an error.
JD doubled their runs in the fourth as Miles hit a 2-out homer over the left field fence to make it 4-0. A Wood single and an Underwood triple made it 5-0, and Burns singled to score Underwood to up the score to 6-0.
In the fifth, Payton Thigpen walked and three wild pitches got her all around the bases to make it 7-0.
The Lady Jackets ended the game by the run rule in the bottom of the sixth as Wood doubled and Underwood drove in pinch runner Jacie Jones with a single.
Miles led the hitting with a double and a solo homer. Underwood had a single, a triple and three RBI, Wood had a single, a double and an RBI, Burns had two singles and an RBI, Lilliott doubled, and Sellers singled.
Catcher Sellers continued to give runners a hard time as she threw out another runner attempting to steal second.
Parlor held Banks hitless through the first five innings before giving up a 2-out double in the sixth. She walked two and struck out six.
Score by innings:
JDHS 1 0 0 0 0 1 0 -2
BCHS 0 0 0 0 0 0 0 -0