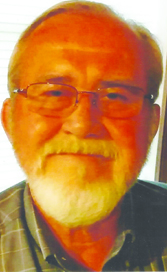 The late Snooky Thornton was just as much a part of the Googe family as were those who carried the Googe name. Snooky was the person that made Googes the place to go for quality meats. 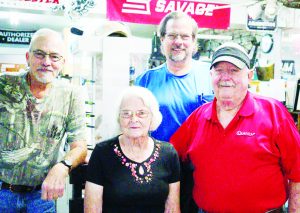 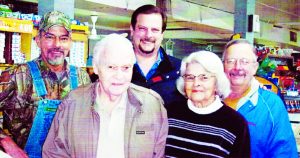 In a 2010 photo, the late Olen Googe is pictured with his family. From left, David, Olen, Ray, Mary and Lamar.

By TOMMY PURSER
Sometime in 1972, Olen Googe stopped at Rentz Grocery on Jarman Street in Hazlehurst to get gas for his vehicle.
Fresh off a 20-year career in the Air Force, the father of three young boys wanted to return to his hometown of Hazlehurst along with his wife, the former Mary Altman who grew up in the Altamaha section of Jeff Davis County.
Olen asked the owner of Rentz Grocery if he would be interested in selling the store that had been in his family for three generations. He said yes.
On Jan. 1, 1973, Olen became the owner of Rentz Grocery and changed the store’s name to Googe’s Superette. The store proved to be an instant success and not long after acquiring it, Olen coaxed his oldest son, Lamar, to leave his job at Hazlehurst Mills and go to work at Googe’s along side his mother and father.
David, the middle of the three sons, began working at the store as a 15-year-old high school student. And the last of the Googe boys, Ray, joined the team after four years working for Interstate Leasing.
Also joining the team — and family — was Snooky Thornton whose meat cutting expertise soon turned Googe’s Superette into The Place in Jeff Davis County to get quality meat.
Just short of 40 years after opening Googe’s Superette, Olen became ill and after a long struggle with deteriorating health, he passed away in 2012.
Googe’s Superette became Googes Inc. …. that’s a plural Googes.
Long before Olen Googe’s death, the grocery store was faced with enormously expanding competition as chain convenience stores began to spring up all over Hazlehurst. Those chain stores brought with them prices with which small, family-owned grocery stores found it hard to compete. Other family-owned stores in Hazlehurst soon began closing their doors for good but Olen and his family came to the conclusion that, if they were to survive, they needed a change of focus.
With Lamar being an avid fisherman and David consumed with hunting, the family made the decision to specialize in hunting and fishing to supplement the grocery, plumbing, household needs, hardware …. you name it, Googes has it.
Now, each time of the year when deer season, dove season, turkey season, bow season, etc., comes around, Googes can be found encircled with pickup trucks as hunters stock up on supplies and have their weapons fine tuned.
Many of those hunters are among the dozens of Florida residents who make periodic trips to this area of Georgia to hunt on leased forest lands. Over the years, the Googes have forged long-held friendships with these sportsmen and sportswomen from south of the Georgia state line.
The store has become an icon in Hazlehurst and Jeff Davis County over the almost five decades since Olen Googe purchased it.
The hunting and fishing business is thriving and Horace “Snooky” Thornton Jr.’s meat business continues successfully. Today, three months after Snooky’s death in July of this year, Googes is still known for its quality meats.
In recent months, the family made the decision to sell the store that had become such an integral part of their lives. The new owner, Garrett Harrison, has vowed to keep the Googe name on the business and to continue to operate the store as the Googes have since 1973.
The family will stay at the store until the transition is complete and Lamar says he’ll work for Harrison on a limited basis. David and Ray will probably go in different directions and Mary, now 88, can live out her remaining years with fond memories of a highly successful family business that has kept their family close-knit, and happy.
And has served generations of Jeff Davis County families with warm welcomes and a trademark commitment to please.