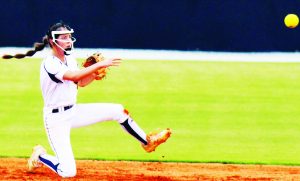 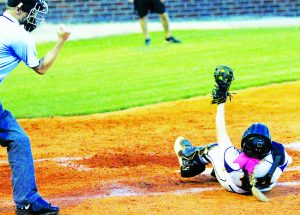 Jeff Davis High’s softball team lost two of three games last week, with all three games decided by a single run.
The Lady Jackets fell 2-1 to Coffee County in Hazlehurst, topped Berrien County 4-3 in Nashville and dropped a 6-5 decision to Bacon County in Hazlehurst.
Coffee scored a pair of unearned runs in the top of the fifth inning to break a scoreless tie. The Lady Jackets responded with a run in the bottom of the inning but that was all the scoring for the game.
A 2-out error in the fifth got a Lady Trojan on base and a 2-run homer sealed the victory for Coffee.
The Lady Jackets’ run also came with two outs when Laisha Hernandez singled, Jenna Miles walked and Ella Wood followed with a double to score Hernandez. An intentional walk to Jaci Underwood loaded the bases but the next batter popped out to end the inning with the bases full.
The Lady Jackets managed only four hits, Woods’ run-scoring double and singles by Miles, Hernandez and Bentlee Metts.
Parlor pitched a 4-hitter, walking four and striking out eight.
The game in Nashville featured a pair of top 10 ranked teams. Jeff Davis entered the game with a 20-5 record and Berrien was 17-5.
JD got a run in the top of the first inning as Hernandez singled, stole second and scored on an Underwood single.
A 2-run homer in the bottom of the inning gave Berrien a 2-1 lead.
The Lady Jackets went up 3-2 in the top of the second as Peyton Thigpen drew a one-out walk and Analese Poole doubled with two outs to score Thigpen. Miles followed with a single to drive in the other run.
With the score tied 3-3 in the fifth, Hernandez led off with a single, two outs later Alicia Lilliott singled and Kalleigh Sellers singled to drive in the winning run.
Underwood had two singles and an RBI, Hernandez singled twice, Poole doubled and drove in a run, Miles and Sellers both had a single and an RBI, and Lilliott singled.
Underwood got the win in relief and Parlor earned a save, pitching the final two innings. Burns started on the mound and threw three innings. She gave up two earned runs on four hits, walked three and struck out one. Underwood pitched two no-hit innings, walking none and striking out none. Parlor gave up one hit, walked one, hit one and struck out five.
The Lady Jackets jumped out to a 4-0, 1st inning lead over Bacon and led 5-1 after five innings. But the Lady Raiders scored five runs in the last two inning to pull out the 6-5 victory.
Miles opened the bottom of the first inning with a single, stole second, went to third on a Hernandez ground out and scored on a wild pitch. With two outs, Sellers got a run-scoring single and Burns, who reached base after being hit by a pitch and made her way to third, scored on another wild pitch. Parlor followed with an RBI single to make it 4-0.
Jeff Davis had an opportunity to blow the game wide open in the fifth as Miles and Underwood singled and Burns doubled to drive in a run. Lilliott was then hit by a pitch to load the bases with one out. But Bacon retired the next two batters to end the threat.
A 3-run sixth inning got Bacon within 5-4. Parlor, on the mound in relief, retired the first two batters in the seventh. But a pair of walks and a single loaded the bases and a 2-run single gave Bacon the lead 6-5.
In the bottom of the seventh, the Lady Jackets got two on with one out but couldn’t come up with a hit to tie the game.
Miles had a pair of singles to lead the hitting. Burns doubled and drove in a run, Parlor had a single and an RBI, and Hernandez, Underwood, Lilliott and Sellers each had singles.
Parlor started on the mound and pitched the first four innings. Underwood took the mound in the fifth and, in the sixth, she got into trouble and Parlor returned to the mound.
Parlor took the loss. She pitched 5 2/3 innings, giving up two runs on six hits, walking seven and striking out four. Underwood went 1 1/3 innings, giving up four runs on three hits, walking three and striking out none.
Score by innings:
CHS 0 0 0 0 2 0 0 -2
JDHS 0 0 0 0 1 0 0 -1