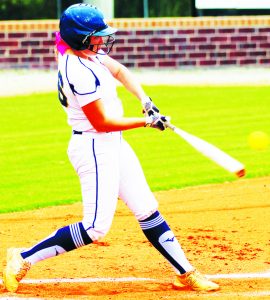 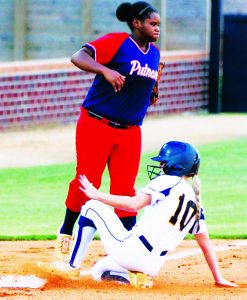 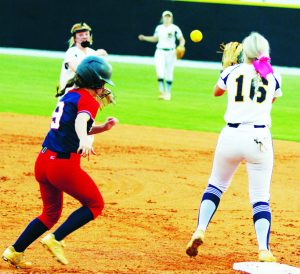 Kelsey Parlor pitched a no-hitter and pitchers Jaci Underwood and Maeleigh Bruns combined for a 1-hit shutout as Jeff Davis High’s softball team swept Putnam County 13-0, 16-0 in the opening round of the GHSA state playoffs.
And the Lady Jacket bats were hot as they banged out 27 hits — 10 for extra bases — in just eight innings of play.
Ella Wood led the onslaught with five hits, Jenna Miles had four and Annalese Poole and Malleigh Burns three each. Eleven Lady Jackets got hits in the two games.
In the opener, Parlor retired the first 11 batters she faced, eight by strikeout. In the top of the fourth with two outs, Putnam got its first base runner via an error. Parlor then hit the next batter but struck out the final batter to end the inning. Those were the only two baserunners the Lady Panthers had in the game.
Jeff Davis scored four runs in the first inning thanks to a couple of walks, back-to-back doubles by Underwood and Burns, and an error.
JD got a single run in the second as Miles doubled, Wood singled, and Burns singled.
The Lady Jackets upped the lead to 10-0 with a 5-run third. A walk and back-to-back errors got the first run on the board. Underwood singled to drive in another run and Alicia Lilliott had a sacrifice fly to drive in the third run. After Payton Thigpen drew a walk to load the bases, Kalleigh Sellers ripped a 2-run double to make it 10-0.
With two outs in the bottom of the fourth, Wood singled, Underwood walked and Burns doubled in a run. Lilliott followed with a 2-run double to end the game by the run rule.
Burns was 3-for-4 with two doubles and four RBI to lead the offense. Sellers had a pair of doubles and two RBI, Lilliott singled and doubled and drove in three runs, Underwood had a single, a double and two RBI, Wood had a pair of singles and an RBI, Miles doubled and Bentlee Metts added a single.
Parlor’s no-hitter came with nine strikeouts and one hit batter.
In the second game, the Lady Jackets had a pair of 8-run innings, in the 1st and 4th to win again in four innings.
Underwood threw four innings, giving up a lead-off double in the second inning and then striking the next three batters, stranding the runner at second. Burns retired all three batters she faced in the bottom of the fourth.
The Lady Jackets sent 13 players to the plate in the first inning and 14 batted in the fourth.
JD had six hits in the first inning with Wood getting two singles and two RBI in the inning. Lilliott had a 2-run triple in the inning and Poole had a 2-run double. Four walks in the inning added to Putnam’s woes.
Burns led of the fourth reaching on an error. She advanced all the way to third on a wild pitch and then scored on another wild pitch. With one out, Sellers, Poole and Thigpen got consecutive singles and Caitlyn drove in two runs with a double for an 11-0 lead. Miles followed with a run-scoring single, Wood doubled in a run, Underwood drove in a run with a line out, and back-to-back RBI singles by Kira Buford and Poole put the score at 16-0.
Three Lady Jackets had three hits, led by Wood and Poole who both had two singles, a double and three RBI. Miles had a trio of singles and an RBI, Thigpen singled twice, Lilliott tripled and drove in two runs, Banks doubled and drove in two runs, Buford singled in a run and Sellers added a single.
Neither Underwood nor Burns gave up a free pass during the game. Underwood struck out five and Burns one.
Score by innings:
PCHS 0 0 0 0 – 0
JDHS 4 1 5 3 -13